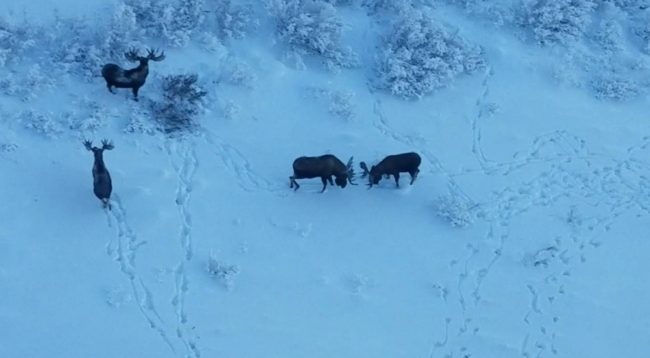 Arctic National Wildlife Refuge
The Budget Reconciliation bill includes repeal of the Arctic National Wildlife Refuge oil and gas program and a buy-back of all existing leases. However, the reconciliation bill has been delayed due to negotiations with conservative senators and representatives over their objections about its size and timing and is expected to be taken up by the full House later this month.

Extensive comments on the Notice of Intent of scoping for the Supplemental EIS (SEIS) were prepared by many organizations and experts and were organized and submitted by Trustees for Alaska. Friends and more than 20 other organizations signed on to the comments. The scoping report by the BLM is expected by the end of the year.

The threat to the Coastal Plain concerning the SF 299 application by Kaktovik Inupiat Corporation (KIC) for a winter right-of-way across the tundra in a wilderness study area continues. The USFWS reviewed their application and determined that KIC will need to provide additional information to complete their application. There will be a 30-day review period of an updated application. The significance of this effort by KIC is related to the Izembek application for a similar inholding right-of-way. Both claims of a surrounded inholding without access ignore the facts that Kaktovik and King Cove have marine access and other options. If these questionable gambits succeed, it will make that process available for similar claims in other refuges and possibly in national parks and all federal conservation units. That would be a disaster for all national conservation lands.

The contractor’s evaluation of the Kaktovik claim of historical vehicle use for subsistence activities in the Arctic Refuge tundra, including Wilderness study areas, is progressing and should be completed sometime in December. The decision will be made by the Arctic Refuge Manager.

Izembek National Wildlife Refuge
There has been no word from the Court since oral arguments were held before the Ninth Circuit Court of Appeals on August 4 concerning the defendants’ appeal of our second successful lawsuit that stopped the illegal land transfer for the proposed road. However, on September 6, Department of the Interior (DOI) announced that Secretary of the Interior Haaland postponed her trip due to concerns about the high level of COVID-19 infections in Alaska, but we have not heard how this latest development might influence the Court’s decision regarding a possible stay of the proceedings. In the meantime, the State has appealed the decision by USFWS that denied the use of helicopters for the Special Use Permits for activities in designated Wilderness. The final decision will be made by the USFWS Acting Regional Director in Anchorage. We expect that the appeal will be denied.

Other Refuges
We have no significant updates on Kenai refuge regulations, Yukon Flats refuge oil exploration in Doyon inholdings, the Mulchatna caribou herd and possible predator control in Yukon Delta and Togiak refuges, and the BLM Central Yukon Plan.