Skip to content
Alaska’s National Wildlife Refuges Imagine a land inhabited by great herds of caribou, muskox, and walrus; ghostly polar bears, black bears, and massive brown bears; Dall sheep, moose, wolves, and wolverines. Imagine a host of noisy sea birds, vast flocks of waterfowl, and rivers teeming with fish. Place them in an equally staggering landscape, amid vast stretches of towering mountains, rolling tundra, and a myriad of coastal islands. Beyond the imagination is the real thing: Alaska’s National Wildlife Refuges, waiting for you to explore. 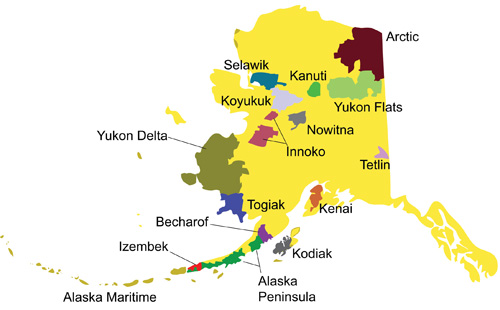 Refuges are the wildest of wild places, ranging in size from the 303,094 acre Izembek Refuge at the end of the Alaska Peninsula, to the 19.6 million acre Arctic Refuge stretching from the Brooks Range to the Arctic Ocean. Nearly all of the 76.8 million acres of refuge lands in Alaska can be described as “wilderness”, but more than 18 million acres have been designated by Congress as Wilderness Areas as part of the National Wilderness Preservation System, thus conserving their natural condition. The mission of the National Wildlife Refuge System, encompassing over 545 refuges throughout the country, is to preserve this unique network of lands and waters for the conservation and management of fish, wildlife, and plant resources for the benefit of present and future generations. The mission of the Friends of Alaska Wildlife Refuges is to assist with this daunting task.