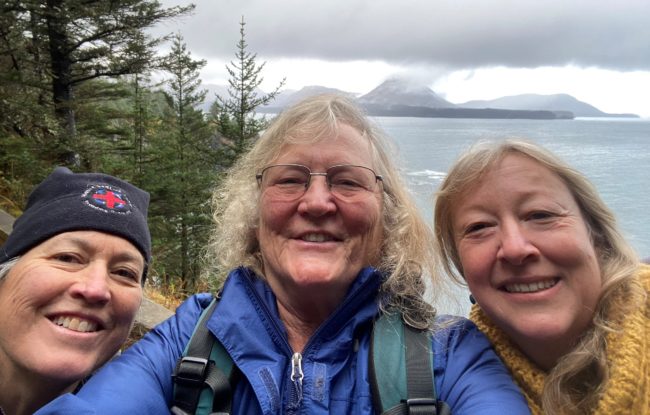 Let me back up and tell you all about the trip that Friends’ Vice President Poppy Benson and I as Kodiak Refuge Liaison had the pleasure of taking in October around National Wildlife Refuge Week.

The Refuge had asked us to come help with events, but we also had things we wanted to accomplish with several local groups. The Friends group has a small footprint in Kodiak and we wanted to increase that by telling folks what our mission is, how we can help them, and encourage them to join Friends.First up was a volunteer appreciation event cohosted with the Kodiak Refuge that acknowledged the efforts of people who contributed their time to Kodiak Refuge projects. The refuge normally held these events annually, but had been unable to do so over the past two years due to the pandemic. More than 30 people attended on a blustery, rainy evening, and we helped lure them in by providing locally catered finger foods. Most of the refuge’s volunteers have been assisting with projects for several years, and one began his association with refuge projects in the 1970s!

The following day, with only an occasional bit of precip falling and the tiniest bit of blue sky taunting us, we set up a Friends table under a tent shared with the refuge at the “Walk for the Wild” event. The refuge visitors services staff set up a walking route that had trivia questions posted throughout and a photo scavenger hunt. Walkers set off with their clip boards and answer sheets to win rewards based on the number of correct answers. With 103 participants, this was the largest Walk for the Wild in Alaska. Many, many families with small children participated and all seemed to have a very good time. And personally, there was a bonus…. I even ticked a bucket-list item off: donning (and dancing in!) the brown bear costume that the refuge keeps on hand for such events. 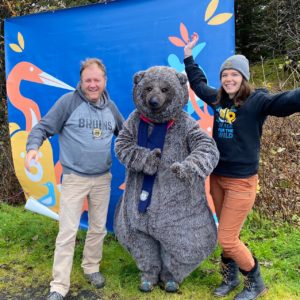 The next day we were part of a small group who conducted a beach clean-up at White Sands Beach.  It’s a few miles out of town and gets a lot of use… many firepits contained a lot of nails leftover from burning pallets.  It felt good to leave the site much cleaner than it had been. 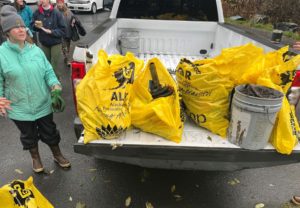 Our last big public event was hosting the October Friends meeting, Tracking Puffins Across the Kodiak Archipelago.  It was an electronic challenge in linking three remote locations (Portland, Homer, Soldotna) and a zoom audience to the live meeting occurring in the Kodiak Refuge Visitor Center, but it seemed to have gone off without a hitch.  Twenty-six attended in Kodiak with a total audience from all locations and zoom land of 115. 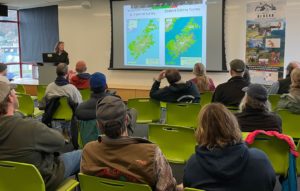 Poppy and I also met with the Kodiak Audubon Chapter’s board of directors, the refuge’s new Community Affairs Liaison, Amy Peterson, at her office at Koniag and the president of the Kodiak Brown Bear Trust to encourage further communications, and hopefully, partner with them on future conservation projects.

Lastly, we had a sit-down meeting with refuge staff, to outline what Friends could do for them and discuss what they most need from us.  We gained five new members on this trip but planted lots of seeds for future partnerships.  And, did I mention, the party at the Refuge Manager’s house? 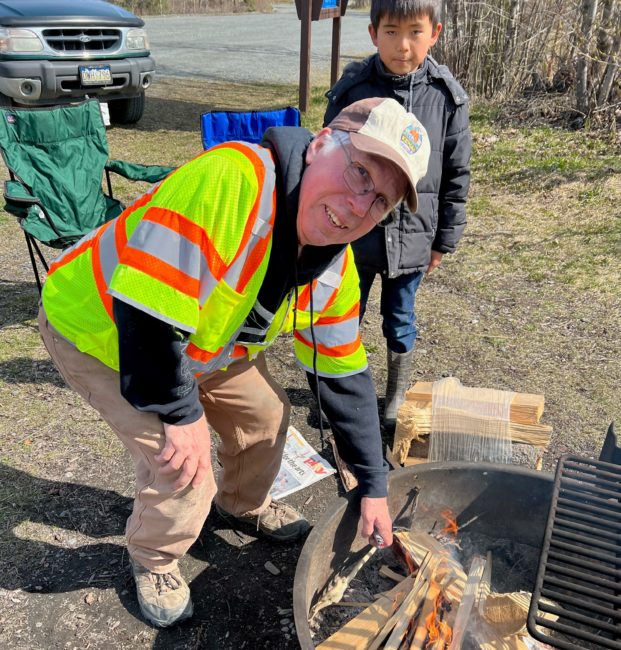 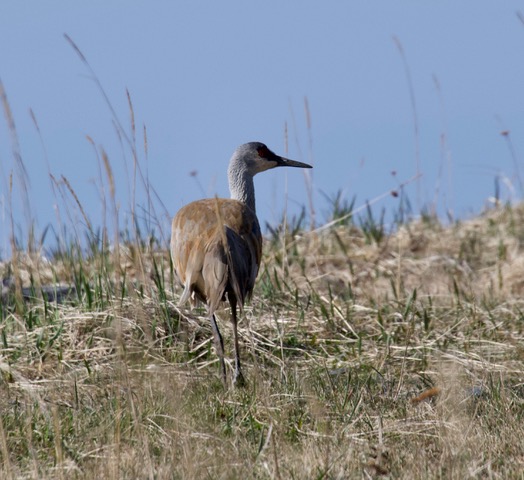 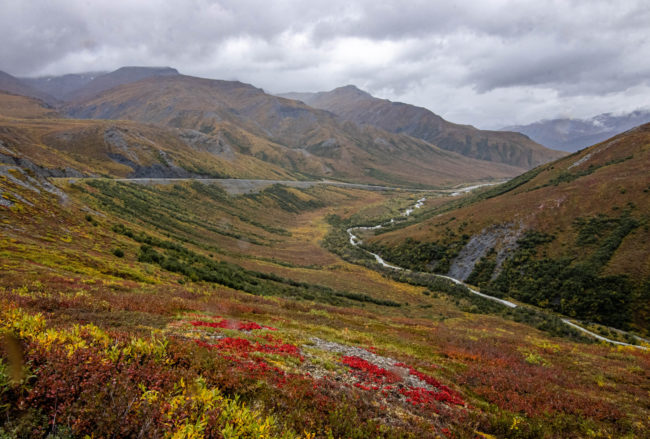 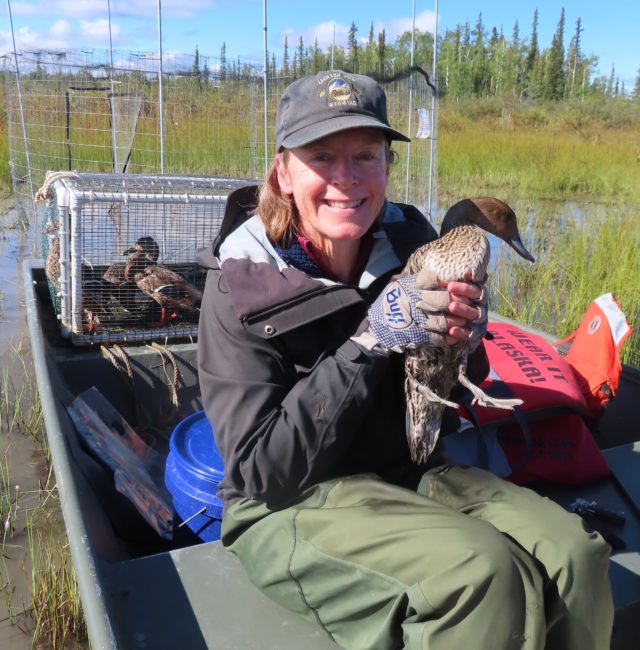 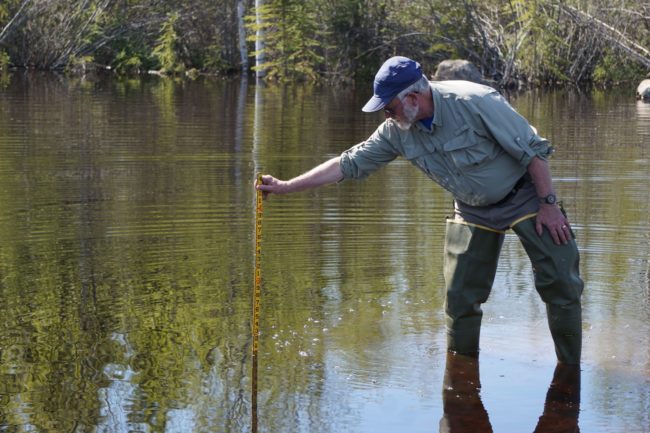 By: Nancy Deschu, Friends member and retired hydrologist from Anchorage. She is the refuge liaison for Alaska-Peninsula/Becharof Refuges.

Our Friends’ trip to Tetlin National Wildlife Refuge Memorial Day weekend was all about water. It was sunny and hot and the refuge was in flood stage. Our original plan to canoe and flag a trail along Desper Creek changed – the water was so high camp sites would be flooded and it would be impossible to paddle back upstream.  After bringing breakfast to the refuge staff, we eight Friends helped Ranger Tim Lorenzini with the annual roadside cleanup.   We then trailered refuge canoes to Deadman Lake for use by refuge visitors, and set up camp at Deadman Lake.  Over the next four days, we made site visits to check on trails and flood conditions along the refuge’s north boundary all the way to the border of Canada.

Water from snow melt, glacial melt, and rainfall in the Nutzotin and Mentasta mountains drives the vast wetlands of the Tetlin Refuge.  The Chisana River (meaning “Rock River” in Upper Tanana language)  and the Nabesna River (meaning “Along the Muddy River” in Ahtna language) head in high peaks in Wrangell St Elias National Park and Preserve, then flow north about 70 miles, and pour into the refuge. Hot, sunny weather in May caused extreme melting in a year with high snowpack so we found high water wherever we went. The boat ramp at Scottie Creek was two feet underwater.

We estimated the high flow at the Scottie Creek bridge by dropping sticks from the bridge and timing the flow of sticks over a set distance with a stopwatch.  We estimated the surface flow to be nearly three feet per second, which is quite fast for the low gradient and otherwise sluggish Scottie Creek.  The lake level at Hidden Lake had risen so much that it floated and then swamped two jon boats stashed in the lakeshore spruce woods. 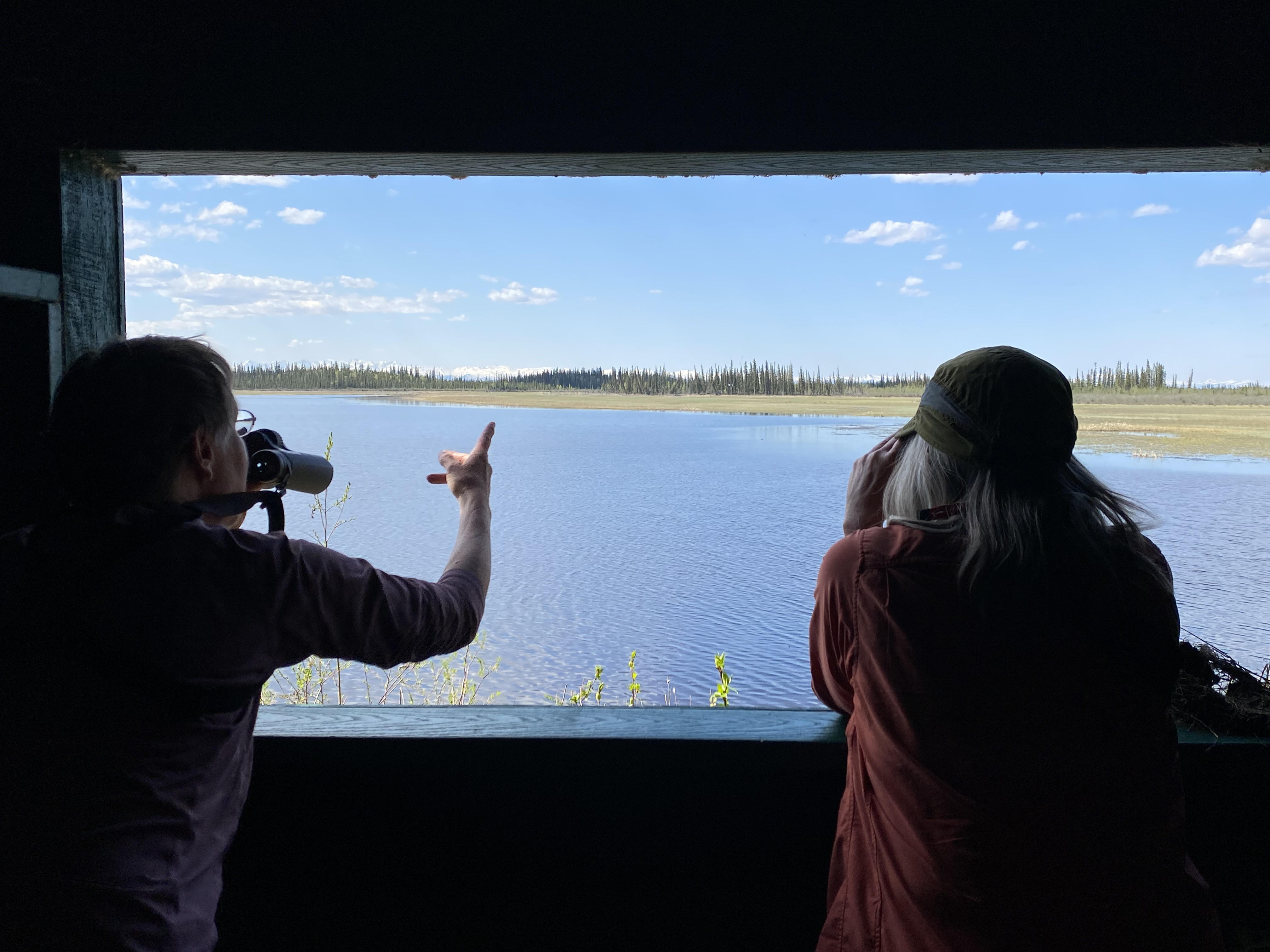 We canoed the entire shoreline of Deadman Lake looking at birds and potential backcountry campsites.  Highlights were several species of warblers flying out of spruce trees over the water to feed on insects, horned grebes, swans and Hudsonian godwits.   We sighted 40 bird species on the refuge including a diversity of ducks.  Ducks were abundant on Yarger Lake, but noticeably fewer were observed on Deadman Lake.  No waterfowl were observed on Hidden Lake. 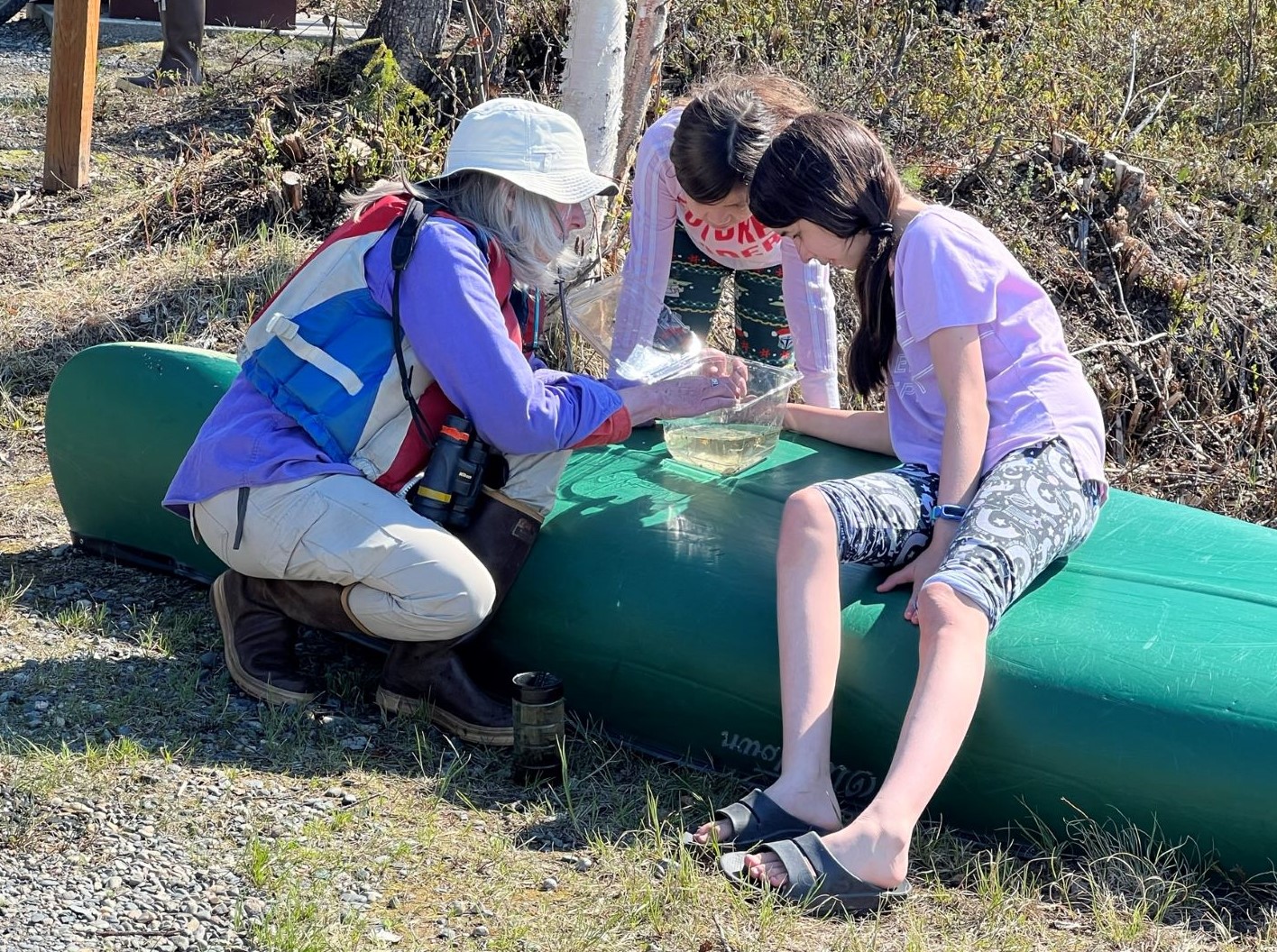 At Deadman Lake we sieved the shallows for aquatic invertebrates. A joyful happenstance was meeting two girls who were fascinated with invertebrates and netting their own trove.  We exchanged specimens in our makeshift aquaria and spent considerable time identifying and observing the creatures.  The girls’ knowledge was impressive!

Although our Tetlin trip was not what we had planned, we were able to contribute our observations on the refuge during unusually high water and enjoy camping and birding on the refuge. 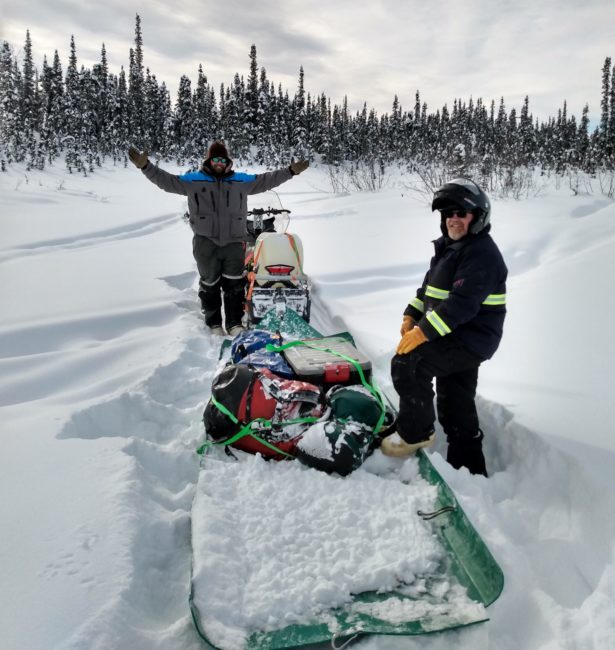 In March of 2022 I joined Ralph Kiehl along with Ranger Tim Lorenzini of the Tetlin National Wildlife Refuge for the purpose of maintaining remote cabins on the refuge.  Over a one week period the work involved cutting firewood, repairing a cabin porch, inventorying cabin supplies, hauling propane and a generator and taking snow depths for biologists.  The fun involved meeting new people, seeing a refuge I had not been to, ice fishing, snow machining and sharing meals. 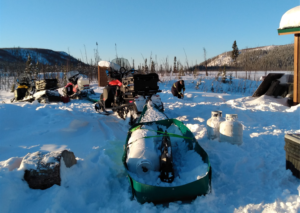 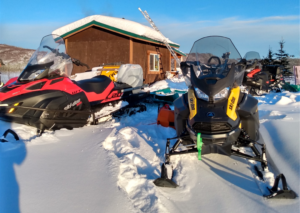 Once in Tok, Ralph and I attended a snow machine safety class, gathered gear for the trip and enjoyed eating at Fast Eddies, the one restaurant in town.  Our destination for this project was approximately 80 miles towards the Canadian border, with our first stop for staging at the Seaton Roadhouse. Once the snow machines were unloaded and packed we proceeded along for another 25 miles, stopping along the way to take snow depth measurements that would help the biologists.

The first cabin we reached was the Stuver Lake Cabin with a stunning lake view.  After two days at this cabin shoveling snow, cutting wood and making repairs we headed another 15 miles to Jatahmund Lake Cabin where we spent another 2 days. We were greeted with the sight of 15 caribou on the lake.  At this cabin in addition to cutting wood, shoveling snow off roof structures, our repairs included building a new toilet seat for the outhouse! 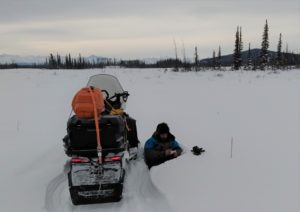 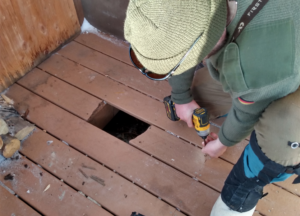 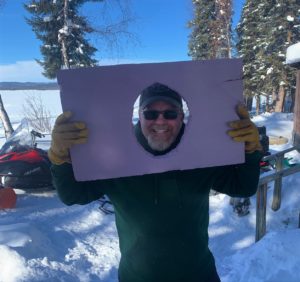 Other duties as assigned. Dan builds an outhouse seat. 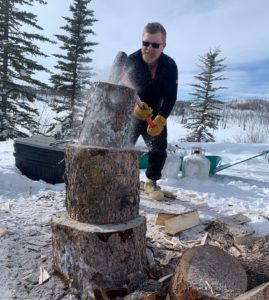 Dan was a wood-splitting machine. 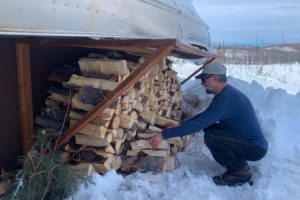 Ranger Tim kept Ralph and me well-fed throughout the trip, cooking was done inside the cabins on propane stoves.  Gathering clean snow for drinking and cooking was a daily occurrence. 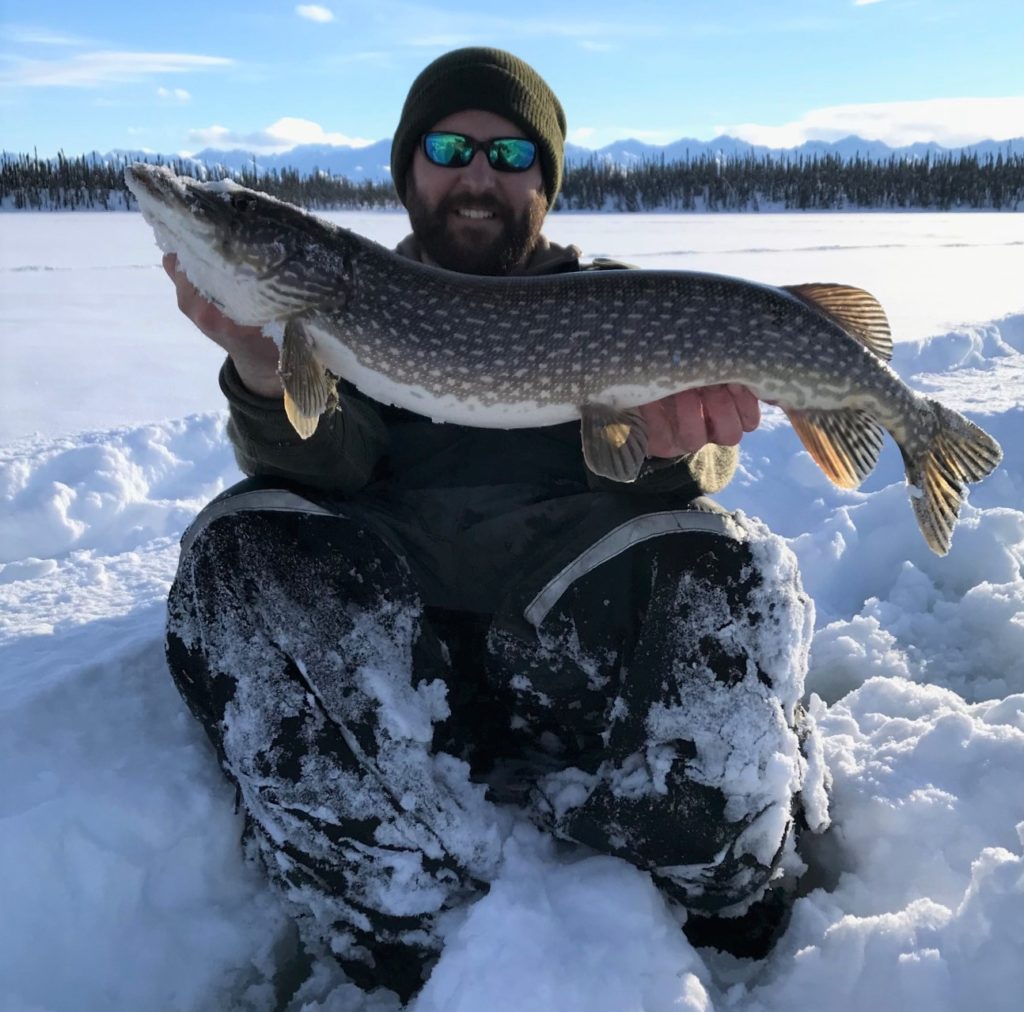 My favorite part of this volunteer opportunity was seeing new country and sharing in the work of maintaining a refuge.  Volunteering with the Refuge was gratifying and satisfying.  I highly recommend volunteering if an opportunity comes your way. 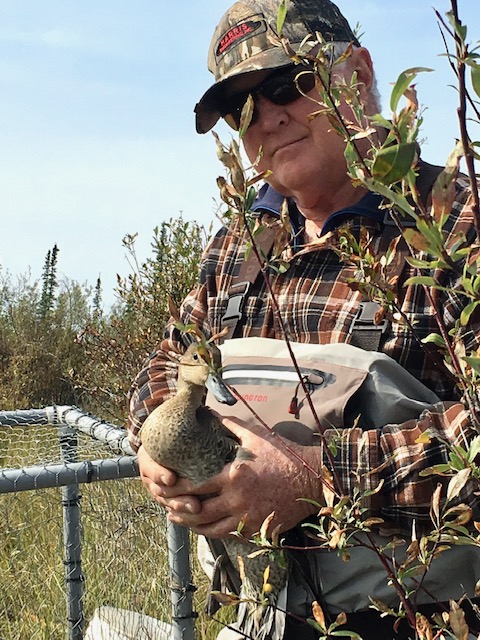 By: Susan and George Hedrick

The dynamic wetlands of Tetlin Refuge in Tok provided a stunning backdrop of sunshine and nesting trumpeter swans for the Hedrick’s 2 week volunteer opportunity.

As Kenai based Friends of the Alaska Refuges, George and Susan  assisted refuge biologists with the often muddy tasks of duck capturing and banding.

Motoring across a Tetlin Passage lake, tromping in the mud and corralling ducks within an enclosure all provided fun and a terrific experience for learning about duck ID, habitat and  the importance of the national duck banding program to support migration data. 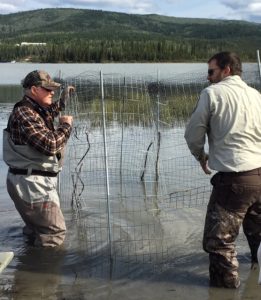 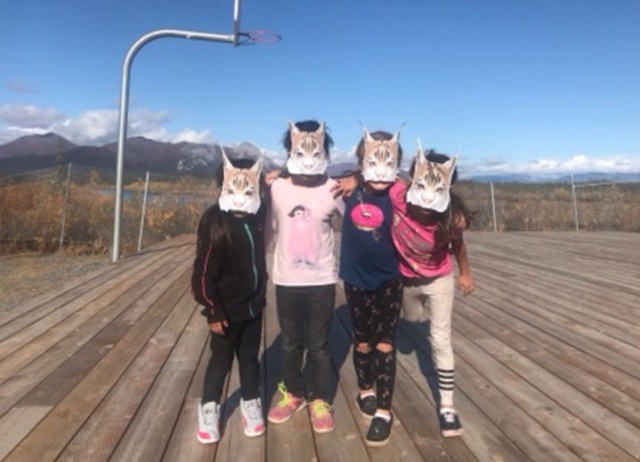 I had the wonderful opportunity to be part of Camp Goonzhii earlier this fall. The annual Science and Culture camp was held at the school in Arctic Village in early September. For three days, the students and teachers at the school, the camp instructors, and members of the community shared activities and stories about the environment, traditional culture and the refuge. 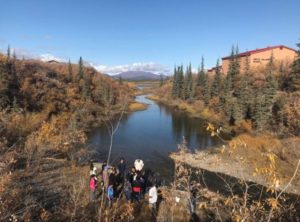 The six instructors took turns filling in all the blocks in the school schedule, alternately doing activities with the different age groups. I led the session on Aquatic Macroinvertebrates, starting with a field trip to the stream by the school to see what we could get into our bug nets.


After our collected samples settled overnight, we observed and sorted what we found and talked about what the aquatic organisms needed to live, and what needed them, and their role in the river environment overall. The fast moving scuds and erratic water boatmen were by far the favorites! 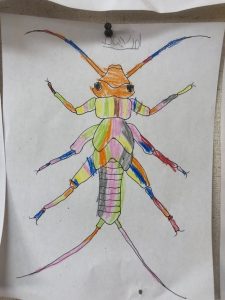 Related activities included traditional fishing and how to build a fish trap and an art project where the students did invertebrate art based on what we saw in the stream. There were also class activities and games such as learning about lynx, soundscapes and plastic pollution.

A big thank you to Allyssa Morris and Katherine Monroe at USFWS for all the organizing, to the school for hosting us, and to Friends of AK Wildlife Refuges for sending folks out on these volunteer opportunities. The Friends group also supported a community dinner at the school.

There were a number of hugs from small people when school ended on Friday! 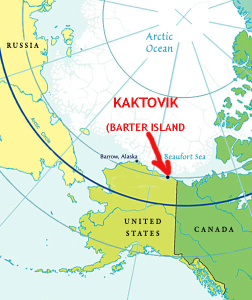 I just returned from my second trip to Kaktovik as a Friends volunteer. From 9/13 to 9/24 I had the opportunity to return to Barter Island to assist the Arctic Refuge staff in their efforts to manage boat-based polar bear viewing with the community of Kaktovik.  Having spent a month volunteering in 2017, it was a privilege to be able to return and experience another season.  My job was to greet visitors to provide an orientation, and I was pleased to meet several Friends of Alaska National Wildlife Refuges members who had made the trip north.

I also assisted monitoring efforts on the water as the certified gun bearer and boat operator; this year I brought ski goggles so I could see more clearly, as you have to discern whitecaps from polar bears from far away.  The dynamics of bear viewing on Arctic Refuge waters is complicated, but the Refuge and Marine Mammals staff have forged a long-term commitment and dedication to the community, and I feel lucky to have learned from them.  I am grateful to the Friends for this twice-in-a-lifetime experience.