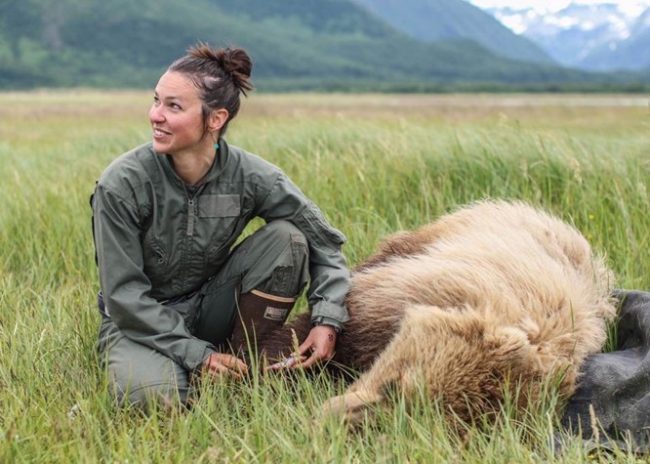 Have you ever wondered what a bear biologist actually does? Get a tour of the Kodiak National Wildlife Refuge—see the lush green landscapes, the jagged peaks, the idyllic remote streams, the majestic bears and wildlife…and get to know the bears of Kodiak just a little bit better. Find out what the refuge has to offer, and the ways our biologists work to maintain the land and resources for future generations. Listen as Joy shares with us what it’s like to be a bear biologist at Kodiak National Wildlife Refuge— the work she does, the needs of bears, and future directions for bear biology and management in Kodiak.

Joy Erlenbach says she became interested in bears because of the adaptability of bears—their ability to adjust to myriad challenges and still succeed—as well as their misunderstood nature.  Joy has studied black, brown, and polar bears but brown bears are her favorite because of their big personalities and grit.

Joy has been Kodiak Refuge’s bear biologist since March 2020. Prior to working for the U.S. Fish and Wildlife Service she was a Postdoc, PhD Student, and Masters student at Washington State University where she studied nutritional ecology of Alaskan brown bears, optimal diets for brown bears in the wild and captivity, and energetics of polar bears on land.  She did extensive field work in Katmai National Park from 2015 to 2018 for her PhD as well as short stints for other projects on the Kenai Peninsula and the Kotzebue area. She has also done field work in Canada, Yellowstone, and California.  She has been involved in 15 scientific papers including her PhD thesis, Nutritional and Landscape Ecology of Brown Bears in Katmai National Park, Alaska.

“One of my favorite memories during some of my work was watching a young wolf and a young brown bear play tag on the intertidal. That and the time the same young bear recognized how bad she was at fishing and gave up and just lazy-river floated down the river instead.”