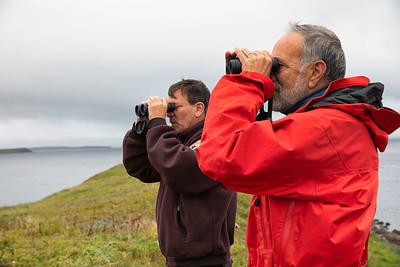 The comment period for the Notice of Intent of scoping for the Supplemental EIS (SEIS) is open until October 4, 2021. BLM is holding six virtual scoping meetings for the SEIS that will take place September 14, 15, and 16. If the reconciliation bill is enacted with the House language that terminates the Arctic drilling leases, this exercise will become moot.

A new threat to the Coastal Plain emerged with an SF 299 application by Kaktovik Inupiat Corporation (KIC) for a winter right-of-way across the tundra in a wilderness study area. KIC claims to be an inholding according to provisions of ANILCA, like the claim made by King Cove for a road through the Izembek Wilderness. KIC had previously been granted an emergency permit to move school modules across the ice in winter, but this request is for an annual permit to move goods and supplies across land each year. Like King Cove, Kaktovik seems not to qualify as an inholding since it has marine access and other alternatives for the proposed uses. The Fish and WIldlife Service (FWS) review of their application must be completed by October 5 to determine the additional information that KIC will need to include to complete the application.

Oral arguments were held before the Ninth Circuit Court of Appeals on August 4 concerning the defendants’ appeal of our second successful lawsuit that stopped the illegal land transfer for the proposed road. Trustees for Alaska did an outstanding job of arguing our position. During this session, the Court suggested a possible stay of the proceedings until after Secretary of the Interior Haaland’s scheduled September 17 visit to King Cove. The Court was concerned that after her visit, the Secretary might take actions that would effectively resolve the lawsuit and waste the resources of the Court if the proceedings were not stayed. The plaintiffs indicated that we would not oppose a stay of the proceedings, but the Government and the State opposed a stay. However, on September 6, the Department of the Interior (DOI) announced that Secretary Haaland postponed her trip due to concerns about the high level of Covid-19 infections in Alaska. We have not heard how this latest development might influence the Court’s decision regarding a possible stay of the proceedings.

The Fish and Wildlife Servic (FWS) denied the use of helicopters to access the Izembek Wilderness in special use permits requested by the State Department of Transportation to inventory cultural resources and wetlands for the proposed Isthmus Road. The FWS issued permits that required access by foot, but the State has refused to sign the permits without helicopter access. We are very pleased that there will be no on-the-ground-activity this summer.

Sturgeon Decision
There has been no further action following the Supreme Court decision in Sturgeon v. Frost, 139 S. Ct. (1066) 2019. Based on this ruling and ANILCA Sec. 103, the State of Alaska asserted primary jurisdiction over navigable waters on federal lands in Alaska.

Other Refuges
We have no significant updates on Kenai Refuge regulations, Yukon Flats Refuge oil exploration in Doyon inholdings, the Mulchatna caribou her and possible predator control in Yukon Delta and Togiak Refuges, and the BLM Central Yukon Plan.