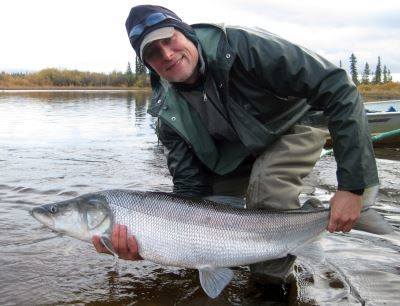 In the summer of 2004, a retrogressive permafrost thaw slump (slump, mudslide) began dumping sediment into the Selawik River in northwest Alaska. It’s location above the spawning area of one of two Inconnu populations (Stenodus leucichthys) that share rearing and overwintering habitat in Selawik Lake, Hotham Inlet and Kotzebue Sound was cause for concern for local subsistence users and fisheries managers. The subsequent erosion of material from the slump has deposited more than 365,000 m3 (477,402 yd3) of sediment into the river, and the silt plume could be seen over 145 km (90 mi) downstream. The spawning area, only 40 km (25 mi) downstream, was threatened by heavy sedimentation. A population age structure study to explore the effects of the slump using otolith (ear bone) aging began in 2011, giving us pre-slump age data as the first recruits from the 2004 spawning event wouldn’t return until the age-9 (2014). Age structure data has revealed an interesting population dynamic not only in the Selawik River population but also in its sister population of Inconnu in the Kobuk River that is being used as an experimental control.

Check here for presentation materials, closer to the meeting date.