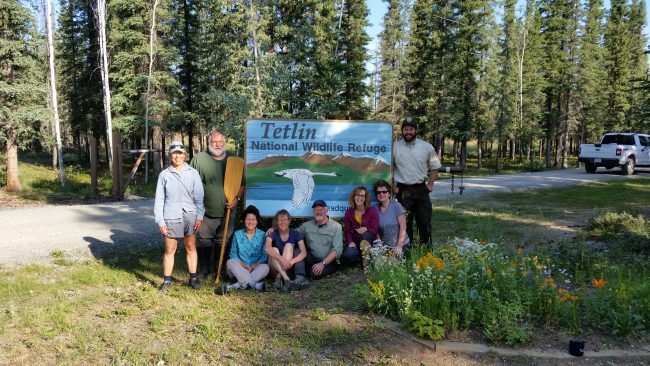 At the beginning of July, a group of Friends of Alaska National Wildlife Refuges met at the Tetlin National Wildlife Refuge to assist with two projects requested by the refuge staff and to explore a small part of the refuge. Although the trip was originally intended to have 12 participants, only 7 were able to come because of concerns about traveling through smoke from wildfires on the way to the refuge. Fortunately, we only experienced a small amount of wildfire smoke at the end of the trip.

The first day’s work was assisting with blocking the Alaska Highway for the Tok 4th of July parade, setting up and manning an information booth about Friends of Alaska National Wildlife Refuges, and doing face painting for the 4th of July celebration. There was intense rivalry between the Forest Service and Fish and Wildlife for the best float in the parade, and the refuge float won out. 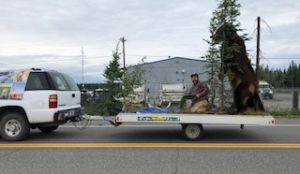 The two face painting volunteers, Moira O’Malley and Georgiana Smith, have extensive experience working with youth and boundless enthusiasm. There was a long line of kids waiting to have their faces painted the entire 4 hours of the festival and the fair grounds were full of fantastically painted children. We were all surprised at how tremendously popular the face painting turned out to be. Steve Ebbert was able to share his knowledge of the Alaska Wildlife Refuge system with people who came by the information booth, and we all explained what it means to belong to the Friends of Alaska National Wildlife Refuges while enjoying the wonderful music of Juno Smile who played the whole afternoon. This two-person band had been unknown to us, but they were fantastic musicians, able to play and sing clearly on pitch and with a toe-tapping beat. 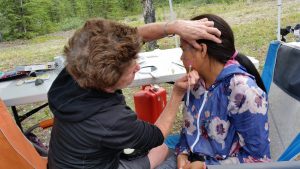 The next morning, we loaded up the canoes and gear and set off the canoe portion of the trip. We went to Scotty Creek to launch, but found the creek far too low to get our canoes and gear on the water with a reasonable amount of effort, so we went back to Desper Creek and paddled downstream to a campsite 3 miles down that was used by the Friends last year. The weather was wonderful. We saw several sets of ducks with ducklings on the creek, a red-tailed hawk and its nest, and the air was full of dragonflies. 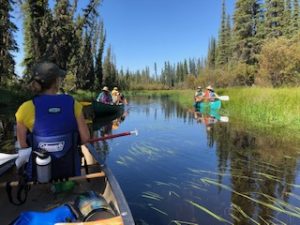 The next day we put up a bird nest box not far downstream from the campsite and then paddled down to the first (unnamed) lake. After Dave Schroyer installed the bird nest box, he let Meg Parsons and Pauline Strong stand next to it while he took a photo. After a lunch stop there, we started the water trail marker part of the project.  The creek is so slow moving that it could be hard to tell upstream from downstream coming out of the lake. We had time to put signs on one side of the creek from the unnamed lake to Desper Lake this year. Clearing the brush for visibility may have been the hardest part of installing the water trail markers.