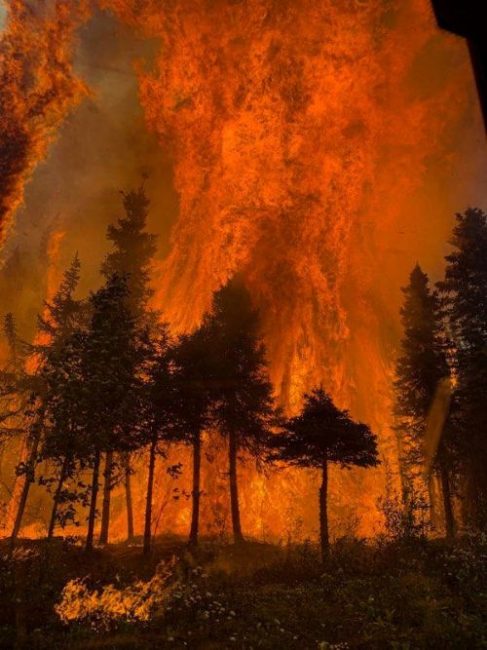 Alaska is burning and so are Alaska’s National Wildlife Refuges.  Over one million acres in 400 separate fires are burning across the state.  Forty-five of these fires are on refuges with 200,000 acres aflame.  Almost every one of Alaska’s 16 refuges has had a fire with the majority of the fire activity on Kenai, Yukon Flats, and Arctic Refuges.  The largest refuge fire is the 100,000 acre Swan Lake Fire on the Kenai National Wildlife Refuge.  This fire was started by lightning in early June in a limited fire management area. Firefighting efforts are concentrated on protecting the towns of Sterling and Cooper Landing, the highway, and HEAs power line while allowing the fire to burn in the wild part of the refuge.   Backfires lit along the Sterling Highway and on the western edge of the fire have been very successful in boxing in the fire and preventing it from spreading in the direction of Sterling. 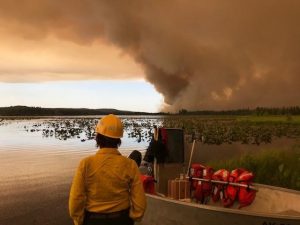 A real benefit of this fire is that it is burning up heavy fuels which will make the towns and the refuge much safer for decades from the risk of a more catastrophic fire. Kenai Refuge biologists learned in earlier studies that black spruce burns about every 80 years, and it has been 80 years since this area last burned.  In the higher elevations, the fire is burning up spruce bark beetle-killed white spruce.  It is a fire-dependent landscape and will adapt.  Positive impacts on wildlife will come as the fire will alter the habitat to an earlier successional stage where “moose food” such as aspen and birch will sprout in the burned areas.  The fire has exhibited some extreme fire behavior burning in the tundra and riparian areas.  The negative impacts of that on wildlife are yet to be determined.  The biggest human impact from the fire has been the smoke which has been particularly hard on communities east of the refuge.  Numerous refuge trails, campgrounds, and public use cabins have been closed due to smoke and fire crews working in the area but none have been damaged so far.  The famed Swan Lake Canoe Route, just west of the fire, has also not been impacted.

Fire conditions have been extreme because a series of high-pressure domes parked on top of the Kenai Peninsula for weeks preventing rain, creating record temperatures, drying fuels and preventing smoke from rising into the high atmosphere.  According to USFWS Regional Fire Management Coordinator Doug Alexander, “I’ve been up here 10 years and I can’t believe how hot it is.  It is nearly 90 degrees every day on that fire.”   Record high temperatures have been recorded throughout the state with Anchorage hitting 90 degrees for the first time ever.  Fortunately, in just the last few days, the normal marine airflow has begun to return, giving firefighters a break by moderating fire behavior.  You can follow the progress of the Swan Lake fire here.