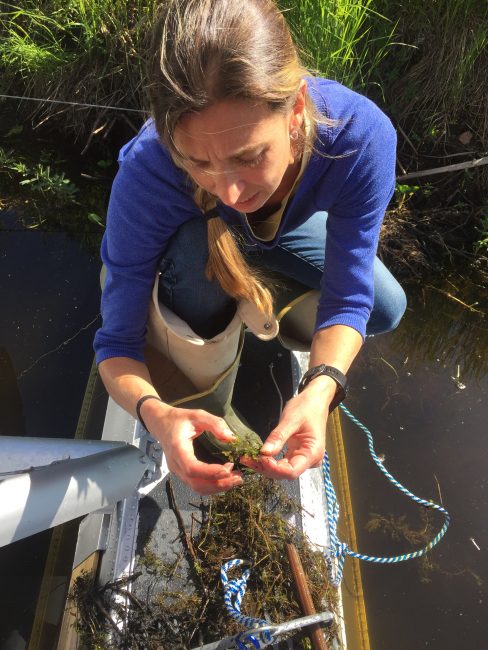 Elodea, the genus for waterweed, can be a nasty plant outside its native range. Known as the first submersed aquatic invasive plant to establish in Alaska, it propagates vegetatively from stem fragments. These fragments hitchhike on boats, trailers and float plane rudders to waterbodies all over Alaska where they can establish and spread quickly. Elodea degrades aquatic habitats by reducing oxygen, increasing sedimentation, altering stream flow and displacing native flora. Dense infestations impede boat navigation into hunting and fishing areas, even hindering floatplane operations. 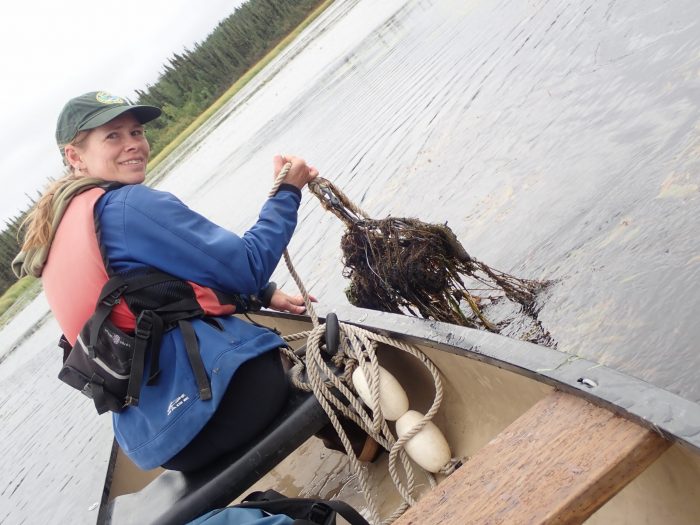 Elodea was probably introduced to the Fairbanks area via an aquarium dump. Chena Slough was chock full of Elodea when it was first identified there in 2009 by a couple of Forest Service scientists. Fortuitously, they had a copy of the Introduction to Common Native & Potential Invasive Freshwater Plants in Alaska.

The discovery led invasive species managers to think about where else Elodea had spread. The Fairbanks Soil and Water Conservation District (FSWCD) took the early lead, conducting Elodea surveys in Chena Slough and popular lakes in the Fairbanks North Star Borough, even as fragments continued to flow down the Chena River. A fellow Fairbanksan said in 2015 that Elodea could be seen adrift in the current from the shore of the Chena Pump House Restaurant. 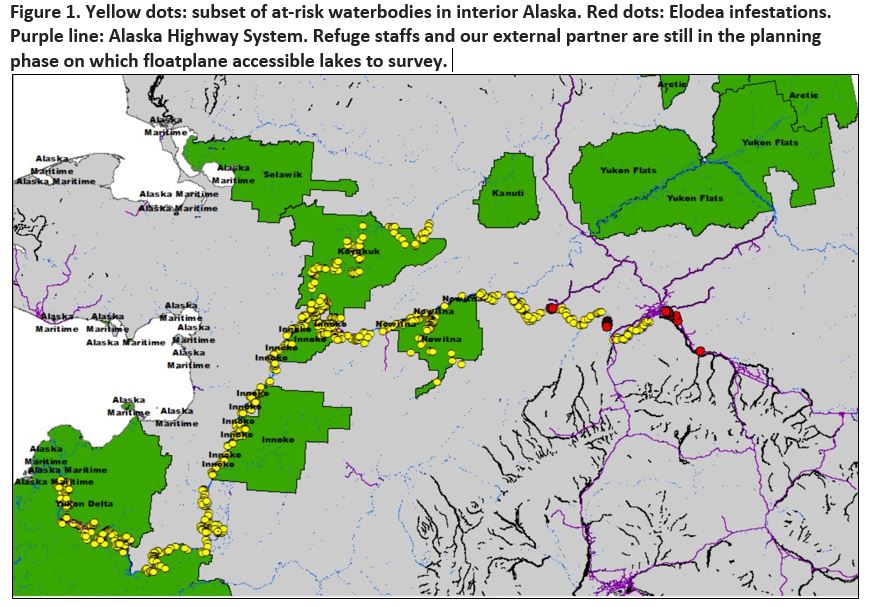 In 2015 I worked with the National Park Service, Fairbanks Soil and Water Conservation District (FSWCD), University of Alaska Fairbanks and other USFWS biologists to survey for Elodea downstream of Fairbanks. It has been found in Totchaket Slough and Manley Hot Springs Slough on the Tanana River, apparently in route to the Yukon River. The Koyukuk, Nowitna, Innoko, Kanuti and Yukon Flats National Wildlife Refuges are all at risk, either downstream of known Elodea infestations or within the dispersal range of floatplanes. 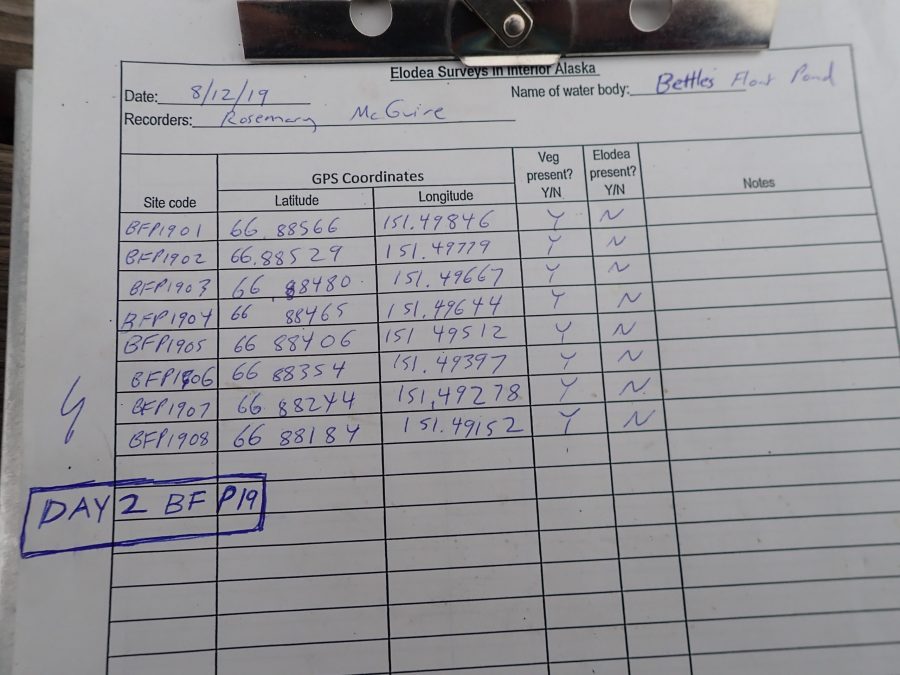 When we considered the scope of the area and the abundance of waterbodies associated with the Yukon River and its major tributaries (Tanana and Koyukuk Rivers), it became clear pretty quickly that we’d have to weed out waterbodies that did not fit the habitat criteria for Elodea. In flowing systems, Elodea seems to prefer low velocity and clear water. Known infestations on the Tanana were found in sloughs with only one entrance (no upper mouth) so this is something we key into when reviewing aerial and satellite imagery. And, of course, we look for waterbodies with a clear connection to the main river. Then, navigating with an iPad, we search for Elodea from the boat or shore, using throw rakes to sample the water column. GPS coordinates are collected for each throw rake location. Collectively we put in a lot of boat time on these rivers. 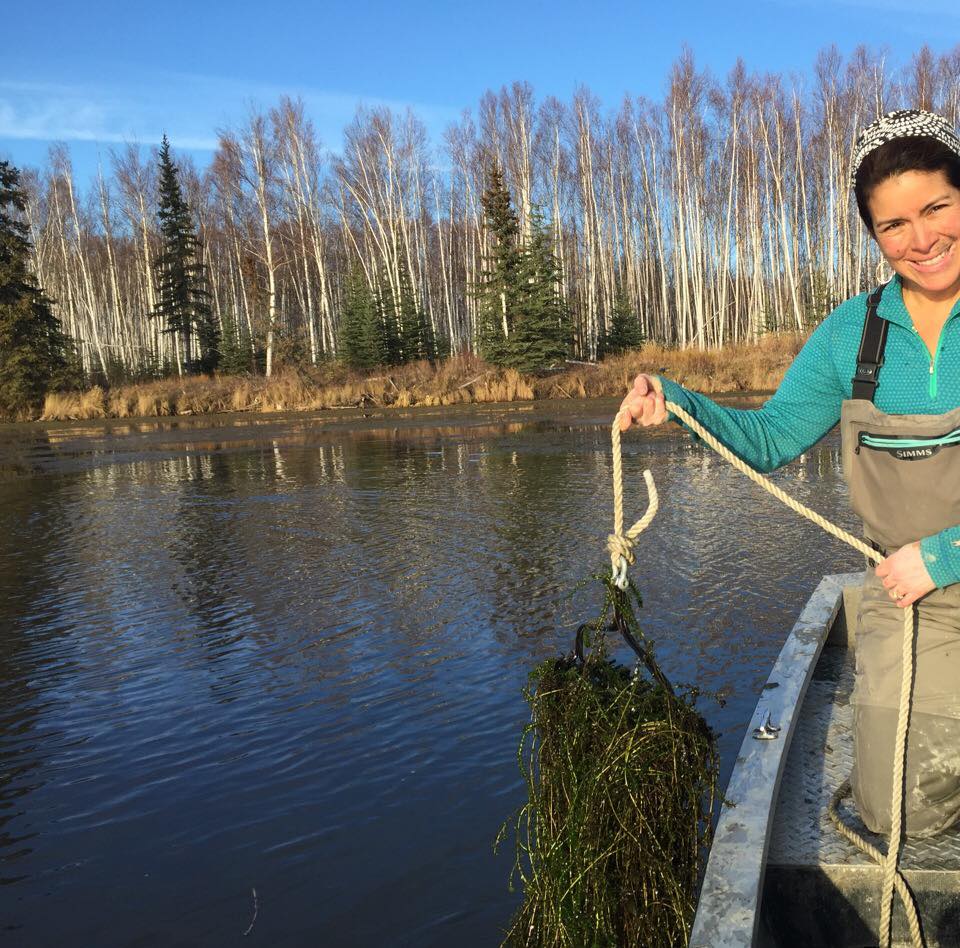 The good news is that even as we survey for Elodea, the FSWCD has begun treating infestations in the Fairbanks area with fluridone, an aquatic herbicide that at extremely low doses can eradicate Elodea but not native flora. To date, fluridone has been applied in Chena and Totchaket Sloughs, Chena Lake and Bathing Beauty Pond.  Birch Lake and Manley Hot Springs Slough will be treated this spring, but the coronavirus may derail that schedule.  Similarly, we had planned to survey the middle Yukon River this summer but the pandemic has put that on hold for now.

We are hopeful that Elodea can be contained and eradicated before it spreads further, but we need your help. Inspect your boat, plane and fishing gear before traveling to other waterbodies. If you see an aquatic plant that looks different, take a photo, note the location and REPORT IT: 1-877-INVASIV (468-2748).  Here’s a great app to help you identify Elodea and other weeds: Help us keep our waters free of invasives!