As battles continue to save the Izembek and Arctic Refuges from destructive developments; the Lower Cook Inlet Seismic Survey, the proposed Donlin mine on the Upper Kuskokwim River, and the proposed Ambler road have been added to the list of threats to our Alaska refuges.

There are no significant developments in the August 7, 2019 suit filed in federal district court that names Friends as the lead plaintiff along with the previous eight conservation partners. The King Cove Corporation plans to intervene on behalf of the defendants. However, the Aleutians East Borough, City of King Cove, and the City of Cold Bay likely will not intervene. The plaintiffs see little to be gained by opposing the interventions. This suit includes the numerous legal claims against the agreement, and we are confident that we will again prevail. Trustees also submitted to DOI “Notice of Violation of the Endangered Species Act Section 7 for Failing to Consult Regarding the Izembek Land Exchange” and intent to sue the DOI on behalf of the same plaintiffs. We will provide updates as these work their way through the legal process.

There is important news concerning DOI plans to sell leases this year for oil and gas development in the Coastal Plain of the Arctic Refuge. The BLM Final EIS was released in September, with a Record of Decision (ROD) expected soon after the close of the 30-day comment period on October 22. A lease sale is planned for December 2019. Since the FEIS was so hastily done and grossly inadequate, without a new EIS process it is likely that the Final EIS will not withstand the many legal challenges that will be raised. Numerous conservation groups, Alaska Native Tribes, states, and legal organizations are carefully analyzing the FEIS and the forthcoming ROD. There is little doubt that there will be a number of lawsuits to stop the leasing program.

The release of the proposed Kenai Refuge predator control regulations is expected very soon. The most serious threat to wildlife is the likely regulation to allow hunting of brown bears over bait, as well as loosened restrictions on hunting in the Skilak Wildlife Recreation Area and 4-whell drive access to frozen lakes. It seems that the DOI is will modify the existing regulations to agree with all of the demands by the State of Alaska. Although the USFWS requested a delay to study the major impacts on these areas and the problems of access posed by damaged trees caused by the extensive Swan Lake fire, the DOI refused to delay the process. It appears that there will be a 30-day comment period, but no public hearings. Friends and other organizations will be closely following these developments and will take action at the appropriate time.

Hilcorp began a seismic survey of its offshore lease site in lower Cook Inlet to search for untapped oil and gas deposits near Anchor Point and Homer. Such seismic blasting can reach 250 decibels and be heard for very long distances. This large number of high intensity blasts would cover 370 square miles, much of it within waters of the Alaska Maritime National Wildlife Refuge. There are potential impacts on fisheries, marine mammals, including the endangered beluga whales, and other marine life, but the Bureau of Ocean Energy Management released an environmental assessment that concluded there would be no significant impact of the seismic activities. Allowing no opportunity for public input, the Bureau claimed the seismic survey would have negligible effects on marine life and birds.  NOAA also announced provisions that allow Hilcorp’s proposed oil and gas activities in Cook Inlet by claiming to minimize harm to marine mammals over the next five years. However, the Center for Biological Diversity filed suit against the administration to stop Hilcorp’s plans that will disrupt the feeding and mating activities of endangered beluga whales and could drive them closer to extinction, in violation of the Marine Mammal Protection Act and Endangered Species Act.

The proposed 211-mile long Ambler industrial road is on an “unprecedented, extreme fast track,” according to a BLM official. This road could have major impacts on national wildlife refuges and parks in northern Alaska.). The draft EIS was limited to 150 pages that lack details and fail to address anything outside of the road construction, e.g., impacts to the Dalton Highway or any mining actions. Numerous organizations are working on responses to the DEIS. 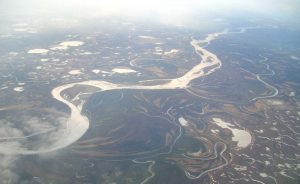 The proposed Donlin Mine lies in the headwaters of the Kuskokwim River, with potentially devastating impacts on the Yukon Delta NWR. According to Alaska Public Media “Many villages in the region are conflicted over the mine. The old mine near the village of Red Devil was built 100 years ago, and now carries a toxic legacy of mine pollution (for a three part series on the proposed mine,” see “The proposed mine requires a lot of infrastructure: a port, an airstrip, a power plant, a proposed 315-mile pipeline to bring gas for the power plant from Cook Inlet, a road and fiber optic cable. . . The Donlin Mine could be one of the biggest gold mines in the world. And the project is well on its way. Last year, it secured two vital federal permits and a handful of state permits. This year, it expects to receive several more. It’s also completing its safety certification for the seven dams it plans to build. That can take up to two years. It’s unclear when they will actually start mining.” However, the Association of Alaska Village Council Presidents, which represents 56 federally recognized tribes of the Yukon-Kuskokwim Delta, has formally opposed the Donlin development. Conservation organizations are closely monitoring this proposed project and its potential impacts on the Kuskokwim watershed and the wildlife and habitat of the Yukon Delta Refuge, one of the largest and most important migratory bird areas on the planet.