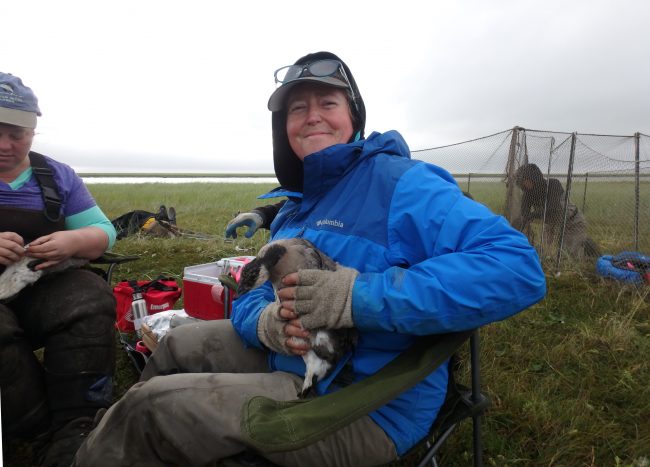 Kristine will present on the population estimates derived from the 2015-16 PRISM surveys and discuss how these may change some of the continental population estimates for several shorebird species.
Kristine Sowl is a wildlife biologist who studies wildlife ecology in subarctic ecosystems. She currently is in charge of the non-game bird program (landbirds, shorebirds, raptors, and seabirds) at Yukon Delta National Wildlife Refuge in western Alaska.  She has spent over 25 years working as a biologist on public lands in Alaska, including Izembek National Wildlife Refuge, Yukon Flats National Wildlife Refuge, and brief stints at the Alaska Peninsula National Wildlife Refuge and Aniakchak National Monument.  She received her Bachelor of Science in Biology from the University of Alaska, Fairbanks in 1985 and completed a Master of Science in Wildlife Biology from the University of Alaska, Fairbanks in 2003.  Currently, her work is focused on the breeding and migration ecology of Beringian shorebirds, including the bar-tailed godwit, black turnstone, bristle-thighed curlew, western sandpiper, and Pacific subspecies of dunlin.