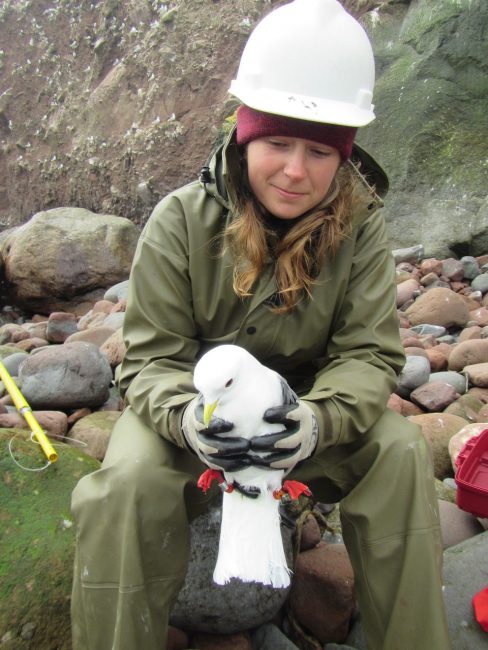 A special bird that few people see, red-legged kittiwakes nest on only a few remote islands in the Bering Sea.  With few breeding colonies and a highly specialized diet of myctophid fish, red-legged kittiwakes are especially vulnerable to changes in their breeding and marine foraging habitats, including those brought about by climate change and introduced predators.  All red-legged kittiwakes in Alaska (85% of the global population) breed on Alaska Maritime National Wildlife Refuge.  For the last four decades, Refuge staff have collected extensive data on this species during the summer breeding season, including numbers of birds returning to colonies each year, numbers of chicks hatching and fledging, and what chicks are fed.  However, we know very little about what happens to red-legged kittiwakes the rest of the year.  Research on other seabird species shows that winter conditions can play a large role in both survival and success at the colony the following summer, so we wanted to learn more about what kittiwakes experienced when away from the colony. 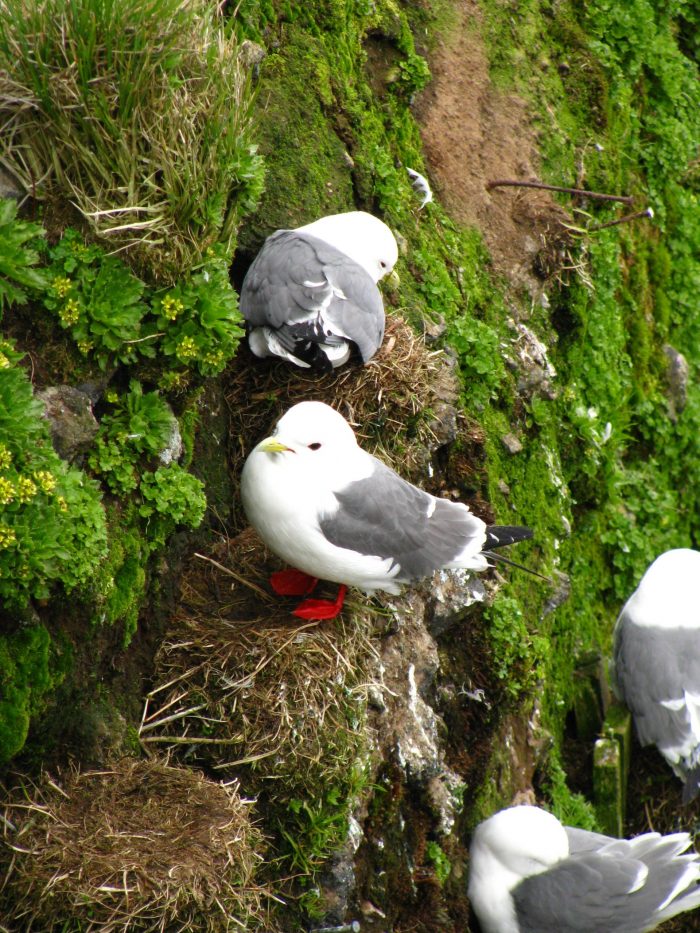 We used geolocation loggers (or geolocators) to record locations and behaviors of red-legged kittiwakes during the winters of 2016-2017 and 2017-2018.  Geolocators are small data recording devices (~1 gram or the size and weight of a large raisin) that attach to a plastic leg band and record light levels and immersion in saltwater.  From those data, we generate twice-daily latitude and longitude positions for each bird and estimate how birds spent their time (flying, sitting on the water, or actively foraging).

To explore whether red-legged kittiwakes from different colonies had similar wintering locations and behavior, we deployed geolocators on birds from the two largest breeding colonies in Alaska, St. George Island in the Pribilof Islands and Buldir Island in the western Aleutian Islands, separated by1000 kilometers.  We captured and tagged kittiwakes during the summer breeding season when birds were attending nests at the colonies.  Geolocators do not transmit data remotely, so biologists must recapture the birds in subsequent breeding seasons in order to retrieve devices and download data.  For the St. George component of the study, we collaborated with Dr. Rachael Orben, an Oregon State University researcher.

We found where red-legged kittiwakes from the two colonies spent the winters depended on the time of year.  Birds from both locations left their breeding colony in late August or early September.  During the fall and early winter (October-December), St. George kittiwakes were in the Bering Sea whereas Buldir kittiwakes were thousands of miles west off the Russian coast in the Sea of Okhotsk.  However, during late winter (January-March), the two colonies overlapped in their distribution, especially in an area east of the Kuril Islands.  By April, birds were back at their respective breeding colonies.  These patterns were almost identical during the two winters of our study.

From the behavior data, we learned that birds from both colonies had similar activity budgets during the non-breeding season, spending most of the night sitting on water and flying during the day.  Most active foraging occurred the hour before and after dawn; this may reflect foraging for myctophids, which are generally available at the ocean’s surface only at night.

We learned important information about where and how red-legged kittiwakes from Alaska’s two largest colonies spend their time when away from the breeding grounds.  The region east of the Kuril Islands appears to be crucial for the global red-legged kittiwake population; interestingly, this area is a winter vacation hotspot for many other Alaskan seabirds.  We hope to publish these data in a scientific journal soon to share this information with other seabird researchers.