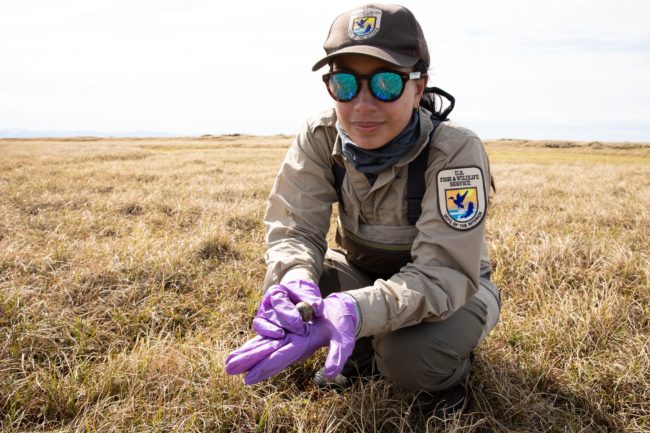 Appointments to DOI and the USFWS continue to move very slowly through the Senate. We still do not know if/when there will be an appointment of a Special Assistant for Alaska. If these processes drag on for much longer, it may be difficult to achieve important conservation goals for Izembek, Arctic, and other Refuges.

Arctic National Wildlife Refuge
On June 1, the Department of the Interior suspended all activities related to the implementation of the Coastal Plain Oil and Gas Leasing Program in the Arctic National Wildlife Refuge. Secretarial Order 3401 directs the Department to initiate a comprehensive environmental analysis to review the potential impacts of the leasing program and to address legal deficiencies in the current leasing program’s environmental review under NEPA. The Department notified lessees that it has suspended oil and gas leases in the Arctic Refuge, pending the review, to determine whether the leases should be reaffirmed, voided, or subject to additional mitigation measures. However, the review and Draft Environmental Statement to be completed in eight months has been assigned to BLM and the USFWS will not be a full participant. This will make it more difficult to ensure that the mission of the USFWS to protect the Coastal Plain will be fully implemented.

The Arctic Refuge Defense Campaign (ARDC) is monitoring the timing of the upcoming Senate budget reconciliation and whether it will include a cancellation of the leases.  Votes on the Budget Resolution could occur before the August recess.

Conservation CEO meetings with key decision makers continued and included meetings with Senate Majority Leader Schumer and Speaker Polosi.  ARDC is developing a paid media campaign in D.C. and target states to ramp up visibility on the Arctic Refuge in anticipation of a possible vote in Late July. Friends made a substantial donation to this. On July 12 in Homer, Friends hosted ARDC Assistant Director, Becca Appel, for a training session on the campaign and what Friends can do to further assist the campaign.

The Arctic Refuge Protection Act continues to gain co-sponsors and is currently at 117 co-sponsors in the House and 30 in the Senate.  ARDC members continue to hold meetings to increase co-sponsorship for the bills.

Izembek National Wildlife Refuge
On June 2, Friends participated in an hour-long special meeting with DOI officials that included, Special Advisor to the Secretary Raina Thiele, Assistant Secretary for Fish and Wildlife Shannon Estenoz, Acting FWS Director Martha Williams, and a DOI Assistant Solicitor. The meeting was requested and superbly organized by Defenders of Wildlife Alaska Director Nicole Whittington-Evans. It included presentations by Nicole, Wilderness Society Alaska Director Karlin Itchoak, former Indian Health Services local director Dr. Pete Mjos, NWRA Vice President and Friends Board Member Caroline Brouwer, Former Special Assistant for Alaska to Secretary of Interior Deborah Williams, Defenders of Wildlife Alaska Senior Policy Advisor Patrick Lavin, and me. We presented very detailed descriptions of the history and all major aspects and arguments against the proposed road, which we hope were effective in educating the DOI officials about the problems and need to reject the road.

The Bernhardt memo authorizing the permitting process for the proposed Izembek road was withdrawn July 15, but DOI says that will not preclude field work. The State of Alaska has reduced its applications for summer work to include only wetland delineations and cultural resources to support resubmitting their application under ANILCA Title XI to construct a road through the biological heart of the Izembek Refuge Wilderness. The Alaska Regional Office of FWS denied the State’s plans to use helicopters to access the Izembek Wilderness. They released a compatibility determination with public comments open until August 8.Izembek WR Public Review Opportunity info can be found here.  Activity could begin in August but permitting summer field work does not necessarily indicate a policy decision on the proposed road. The State will have to comply with the Wilderness Act, Alaska National Interest Lands Conservation Act, and the National Wildlife Refuge System Improvement Act. In the meantime, we await the decision by the Ninth Circuit Court of Appeals concerning the defendants’ appeal of our second successful lawsuit that stopped the illegal land transfer for the proposed road. We were disappointed that the new administration is continuing this appeal, with oral arguments scheduled for August 4.


Sturgeon Decision
We have not seen further action following the Supreme Court decision in Sturgeon v. Frost, 139 S. Ct. (1066) 2019 was the announcement by the State of Alaska concerning federal waters on the Kenai Peninsula, including the Kenai NWR. Based on this ruling and ANILCA Sec. 103, the State of Alaska asserted primary jurisdiction over navigable waters on federal lands in Alaska. They can apply for quiet title through the courts or to BLM for a disclaimer of interest. If they succeed, they will be able to manage navigable waterways in refuges and parks that might include many rivers and lakes and wild and scenic rivers. This would require a determination of which are navigable waters, which have never been clearly defined. This creates a frightening potential for access to mining, motorized recreation, and oil and gas development on refuge rivers, lakes, and lands. We will work with DOI and refuge staff to minimize these potential impacts.

Other Refuges
We have no significant updates on Yukon Flats NWR oil exploration in Doyon inholdings, the Mulchatna caribou herd and possible predator control in Yukon Delta and Togiak NWRs, and the BLM Central Yukon Plan.