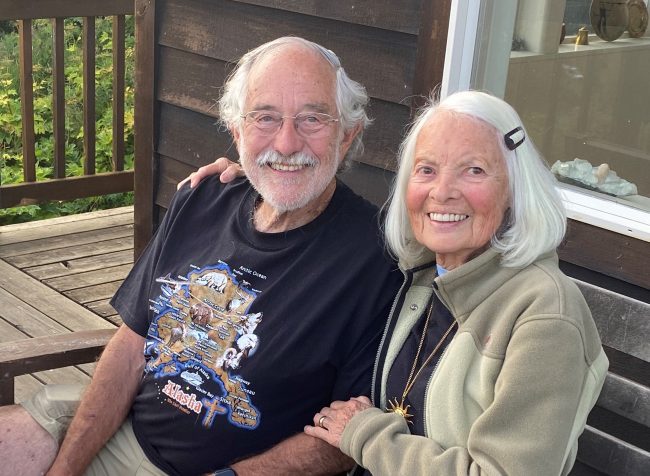 By: Poppy Benson
Long time Friends President and Advocacy Chair David Raskin celebrated his 85th birthday last week and his 61st Anniversary with his wife Marga.  It is timely to reflect on his long involvement with Friends and the conservation struggle.
David came to conservation through fishing.  He developed his love of the outdoors by fishing with his dad as soon as he was big enough to hold a pole.   Decades later, when he was a professor at the University of Utah, it was fishing that brought him to his first conservation fight.  Hiking out after a great day of fly fishing for brown trout on Rock Creek in the Uinta Mountains, he encountered a stranger who remarked, “Enjoy it while you can because they are going to dewater that river.”  That’s when he learned about the Central Utah Project Plan to dewater all the trout streams on the south slope of the Uinta Mountains and transfer the water to develop desert agriculture.  David jumped into the battle against the Bureau of Reclamation plans as conservation chair for the Sierra Club.  This fight lasted years and some rivers were lost but many saved.  Although a dam was built on Rock Creek, this was the last proposed inter basin transfer of water in the country.
Meanwhile, Marga challenged the 5 coal power plants proposed for southern Utah’s red rock country, playing a major role in stopping the infamous Kaiparowitts Power Plant Project.   Both Raskins worked with the Escalante Wilderness Committee that helped to establish Grand Staircase-Escalante National Monument.
A three-month camping trip brought the Raskins to Alaska in 1975, and David bragged that they spent all but two nights sleeping out.  When they arrived in Homer and lookied down on Kachemak Bay, David exclaimed “Brigham Young was wrong.  This is the place”.  They promptly bought land in Homer, but it was 20 years later before David could retire from the University and build their home overlooking the bay.
David’s first involvement in Alaska conservation was as Board President of the Center for Alaskan Coastal Studies.  A chance meeting with Evan Hirsche, then head of the National Wildlife Refuge Association, was his first exposure to wildlife refuges.  David was invited to attend the organizing meeting of Friends of Alaska National Wildlife Refuges in November of 2005 at the Kenai Refuge.  At that meeting, he was chosen as our first president.  Except for two years, David has served as president and advocacy chair ever since.
For someone who knew little about refuges prior to that meeting, David jumped in with his usual enthusiasm.  He says the best way to learn refuges is to visit them.  He has visited 6 of the 16 refuges, including 16 days on the Alaska Maritime’s research vessel the Tiglax,  rowing a raft on the Canning River in the Arctic Refuge on a week long trash cleanup, and eradicating invasive plants at Izembek.  He has testified before Congress several times on behalf of refuges, written most of our position letters on Environmental Statements and federal actions and formed strong working relationships with other Alaska conservation organizations.  David has waged many conservation battles for Friends of which he thinks Izembek has been the most gratifying.  That fight to protect the Izembek Wilderness and globally significant eel grass beds from road development has gone on his entire tenure with Friends.  The recent court decision that preserved the Izembek Refuge was a sweet victory, although it may not be the last word.
Is David slowing down?  Well, he just decided to quit the contract work he has done for 50 years.  When I called him about this article, he was busy working in the engine room of his 36-foot boat.  He was thinking of selling it but decided he would miss the water so much that he is repairing it instead.  He just churned out five pages of thoughtful and technical comments as the Friends response to the proposed Kenai Refuge regulations.  I think we can expect to have his tenacious advocacy on behalf of National Wildlife Refuges for some time.  Happy Birthday David, and Happy Anniversary Marga and David.  Thank you so much for all your efforts on behalf of the wild and the beautiful.