July 2018 Advocacy Update
by Board President, David Raskin and Board Member, Val Glooschenko

The Department of Interior (DOI) has completed the scoping hearings for the proposed sale of oil leases in the Coastal Plain of the Arctic National Wildlife Refuge. In spite of many formal requests to have additional hearings to allow testimony from those were not allowed time to speak at the hearings, DOI refused to extend the hearings, and the June 19 deadline for comments has passed. Conservation organizations estimated that at least a half-million comments were submitted in opposition to the lease sale and there were organized demonstrations at several hearings. We thank all of our members who submitted comments.  The DOI fast-track goal of completing a draft environmental statement (DEIS) in less than six months seems unrealistic if it is intended to comply with federal law. Conservation organizations are closely monitoring this process and will respond appropriately.

The lawsuit challenging the proposed land trade and road through the heart of the Izembek wilderness is working its way through the Anchorage Federal District Court as Trustees for Alaska continues its excellent legal work on behalf of Friends and eight other conservation organizations who filed the lawsuit against the proposed land trade and road.  Our legal brief is due on July 11, and the Department of Justice reply brief is due on August 22. We remain optimistic that we will prevail against this destructive, costly, and unnecessary project.

Of interest was a June 26 interchange between President Trump and Senator Murkowski during a meeting with senate Republican appropriators. Ms. Murkowski erroneously stated it is “a non-commercial road that we have been fighting about for 30 years,” although she has previously stated that the road is for economic development, and the language of her own legislation includes authorization for commercial transportation. President Trump replied that in the next couple of months the appropriations “will be complete and they can go ahead and build.” We have very different ideas! 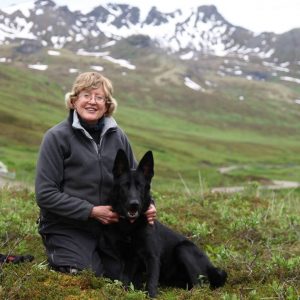 Stop Alaska’s War on Wolves and Bears
by Val Glooschenko

The Department of the Interior has proposed allowing unethical hunting practices on lands managed by the National Park Service?In May 2018, Interior Secretary Ryan Zinke directed the National Park Service to allow extreme hunting methods in Alaska’s national preserves, such as baiting brown bears, killing black bear mothers and cubs in dens, and killing wolves and pups by trapping during denning season.  It is also proposed to allow gunning down migrating caribou while they are swimming and baiting of bears with garbage or donuts.

This unethical attack on bears and wolves on represents a reversal of hunting regulations finalized in 2015 by the Park Service, banning these unsportsmanlike practices. The Park Service implemented its previous 2015 wildlife management regulations after an extensive, multi-year public engagement process in which more than 70,000 Americans spoke out against these shameful hunting methods. However under Ryan Zinke, the National Park Service is being asked to reverse its previous 2015 policy.  Zinke’s reversal, if implemented, would force the Park Service to surrender its authority to protect bears and wolves and return to these shameful and unethical practices

Under leadership of the National Park Conservation Association, a number of conservation organizations are working together to alert the public about this matter.  A strategy is being outlined to generate letters to the editor, opinion pieces, group letters and letters from individual Alaskans opposing the change in park regulations by the National Park Service.  This comment period ends on July 23.

Additional information on this matter is available from the following  websites provided by the National Parks Conservation Association and Defenders of Wildlife: .

Concerns about the proposed new regulations can be submitted through the NPCA or the Defenders of Wildlife websites or sent directly to the address below:

From Members of the Public :

I am an Alaskan (personalize here if possible). Like so many of us, I came to Alaska partially for the opportunity to live in a place with bears and wolves in the wild. I am very disappointed that Secretary Zinke has proposed allowing the state to use extreme sport hunting methods like brown bear baiting to reduce predator populations on national preserves. Those lands were set aside to protect our resources for future generations, including balanced populations of predators and prey. Alaska will be worse off if our national parklands are treated like glorified game farms.

I am a hunter. It is an important part of Alaska culture.  And I am glad hunting is allowed on the 20 million acres of national preserves in Alaska.  But I don’t support extreme sport hunting measures like brown bear baiting, and I don’t support the state of Alaska’s efforts to reduce bear and wolf populations on national parklands.  That is not what our country’s national park lands are for. The National Park Service needs to stand strong and protect predators and balanced, healthy ecosystems for us and for our children.