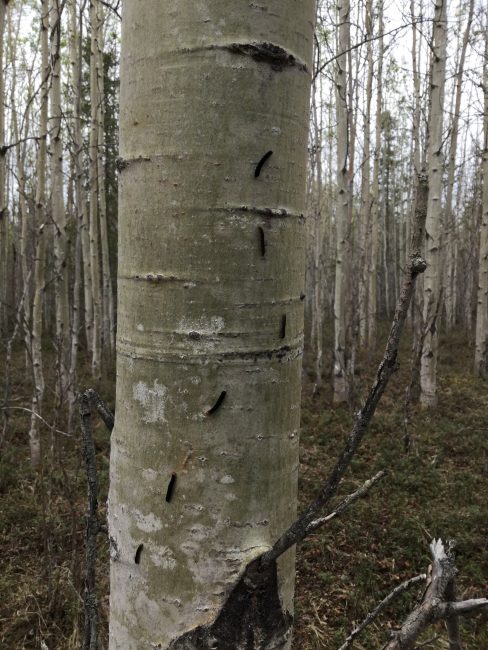 In early June, I received multiple accounts of abundant black caterpillars stripping foliage along the Marsh Lake Trail on Kenai National Wildlife Refuge. Dark caterpillars were subsequently reported from Cooper Landing to Sterling to Kasilof. These larvae consumed leaves of aspen, highbush cranberry, birch, willows, roses, soapberry, and almost any other broad-leaved plant.  Steve Swenson of the USDA Forest Service tentatively identified them as caterpillars of the battered sallow moth (Sunira verberata). This identification was confirmed when caterpillars my kids and I raised in canning jars eventually emerged as adults in July. 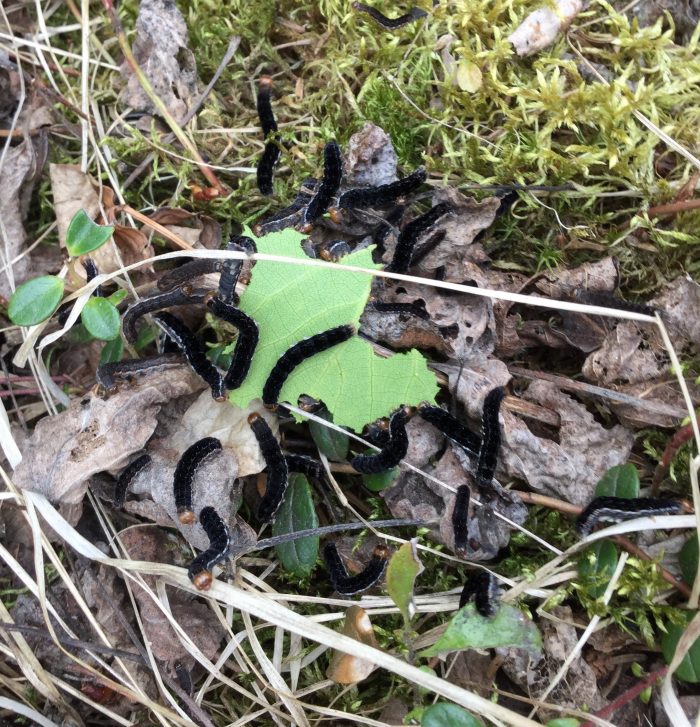 We periodically see outbreaks of these caterpillars in southern Alaska. The last event was in 2017, when  they were seen in numbers along the Richardson Highway and in the Mat-Su, Anchorage, and Kenai Peninsula.  The largest recorded outbreak of battered sallow moth caterpillars happened during 2003–2006 on the Alaska Peninsula, when up to 20,000 acres of alders and willows were damaged annually.  That outbreak, which may have included speckled green fruitworm moths, killed alders on mountain slopes over large areas. Deciduous trees and shrubs like alders and willows can usually withstand multiple years of their leaves being consumed without suffering lasting damage, so the severity of that event was notable.

Although the battered sallow moth naturally occurs from Alaska to central Canada and south to Colorado, there is no record of outbreaks of this species outside our state.  I wonder why battered sallow moths become so abundant in Alaska but nowhere else.  As with other forest caterpillars with periodic cycles of abundance, declines are likely caused mainly by diseases and parasites that pass through the populations.  At least one other sallow moth species is attacked by short-tailed ichneumon wasps.  The female wasp deposits an egg into a mature caterpillar, and the developing wasp larva will eventually kill its host during the moth’s pupa stage.

A Forest Service report links the 2003–2006 outbreak to higher than normal temperatures, but there’s not enough information yet to explain why higher temperatures might lead to increased populations. In related moths, outbreaks are often terminated by “zombie viruses” that rapidly sweep through dense caterpillar populations. The virus alters the caterpillars’ behavior, causing them to stop feeding and climb to the tops of trees. There the caterpillars die and disintegrate, spreading virus particles over the foliage below, where they can be eaten by other caterpillars. In some species the infected cadavers become attractive to other caterpillars, which cannibalize them and then become “zombie caterpillars” themselves. 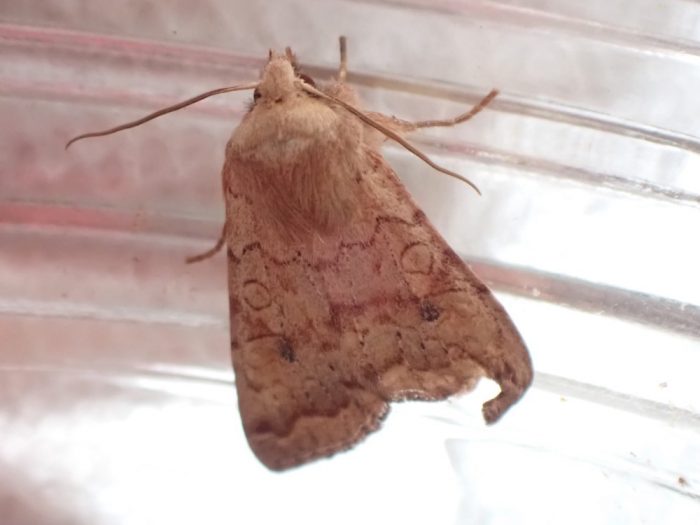 An adult battered sallow moth that emerged from caterpillars raised by Matt Bowser (Kenai Refuge entomologist) and his kids this summer.  The caterpillars were provided by Dan Thompson (ADF&G biologist)

Adult battered sallow moths began emerging in late July, continuing into this fall when they presumably lay eggs. The life history of this species has not been worked out, so we do not know when the eggs hatch and larvae begin feeding. The larvae may hatch in the fall, feed and grow some, then overwinter as small caterpillars. Alternatively, the eggs may hatch in early spring. We do know that the caterpillars are out by the beginning of June.

I will pay attention to what happens on the Kenai Refuge this year and next. In general, we would expect trees and shrubs to recover quite well from this year’s damage unless there are high numbers of battered sallow moth caterpillars consuming leaves for multiple years. It’s also possible that other defoliators, like the recently introduced green alder sawfly, may have additive effects on mortality events, an increasing problem as nonnative insects and a warming climate collide.