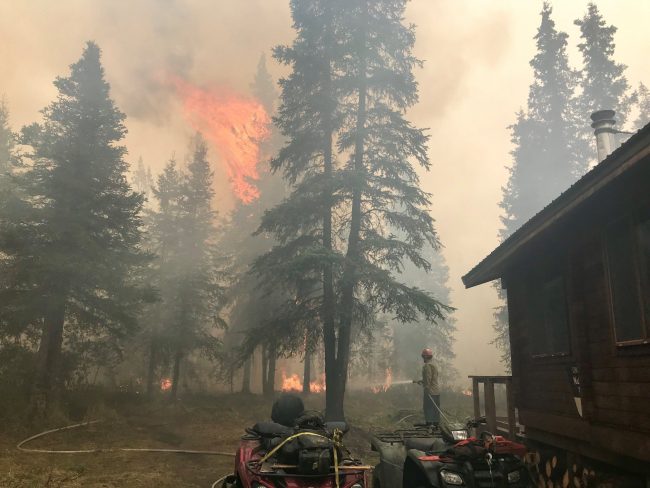 We last reported on the lightning-caused Swan Lake Fire on the Kenai National Wildlife Refuge in July just as temperatures moderated, humidity increased, and the fire spread came to a crawl.  The Type 2 fire crew was sent elsewhere to battle more active fires and life on the Refuge returned to something near normal. 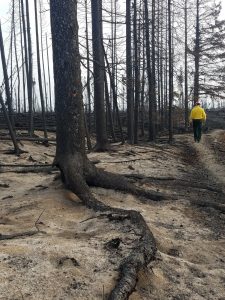 But then came August’s record heat and record drought.  In two intense days a 35 mile an hour wind gusting to 40 whipped up the fire, sending it racing across the landscape.  At 2 am on the night of August 17th as the winds howled, refuge staff began evacuating sleepy campers from campgrounds and cabins in its path.  Less than 24 hours later the fire jumped the highway and the Kenai River and overran the access roads to those campgrounds.  The Sterling Highway, the only road access to the Kenai Peninsula towns of Sterling, Homer, Soldotna and Kenai, shut down for more than a day.  For the next two weeks, the highway would be periodically closed due to hazardous conditions and pilot cars and long waits were often necessary to travel through the burn area.   Dense smoke invaded the communities even as far as Anchorage, and the towns of Cooper Landing and Sterling were put on notice that evacuation might be imminent.  Initial attack on the rekindling of the Swan Lake Fire was complicated by the other three fires burning in Southcentral all of which had the potential to take out many homes and one – the McKinley fire – did destroy more than 50 homes.  The Type 2 fire team that was in route to Swan Lake was diverted to the McKinley Fire because more lives and homes were at risk there.  A Type One (highest level) firefighting crew was then ordered and began to arrive on August 18.  The Great Basin Incident Management Team arrived to attack the r fire concentrating on protecting the towns and highway.  More bulldozers and aircraft were added to the fight although dense smoke shut down aircraft use on some days.  Refuge fire qualified trail crews worked on hand lines and saving the much-loved Refuge recreational cabins.  The Refuge had previously created defensible space around the cabins and that foresight coupled with the efforts of the crew saved all three cabins at risk.   Since July, acreage burned increased 60% from 100,000 acres to 160,000 acres but by Labor Day, the fire had once again slowed to a crawl and efforts moved from firefighting to mop-up. 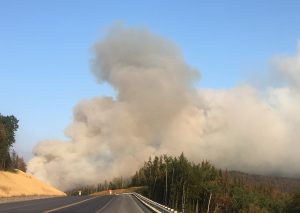 As I write this the rains are falling, temperatures are dropping with the move into fall, and hours of daylight are decreasing by five minutes a day.  It is unlikely that this fire will kick up again this year given this seasonal change, but then again nothing about it has been typical.  From its beginning in June the Swan Lake Fire displayed extreme behavior such as burning in tundra above timberline, burning several feet deep into the duff, and burning over rock piles.  This can best be attributed to the extreme weather of this summer and the flammability of black spruce which has been referred to as “gasoline on a stick”.   According to Leah Eskelin, Kenai Refuge Public Information Officer, even winter won’t completely put out this fire and smoke from hot spots will be visible next summer and maybe even longer.  However, those hot spots will be within the burned area and are not likely to have the fuels available to spread.  She explained that the fire containment lines near the towns are being checked by infrared sensors and human hands to ensure there are no hot spots within 100 feet of the fire’s perimeter.

Thanks to the efforts of the fire crews, there have been no casualties.  However, the fire took an enormous toll on people, particularly those in Cooper Landing and Sterling, who feared for their homes. Smoke and highway shutdowns canceled all kinds of travel plans and events from medical appointments to schools to business meetings to the Friends Kenai River cleanup.  The tourist economy from Homer to Cooper Landing took a hit as visitors did not want to chance driving the highway or breathing smoke.  A big area of the refuge and the adjacent Forest Service lands as well as the famed Kenai River were closed to all recreational use for several weeks.  And, of course, fire suppression costs an incredible amount of public money which is yet to be tallied.  The good news is that no homes or lives were lost and the long-term risk of fire in these communities in greatly reduced now that the mature black spruce trees have been consumed by this fire.

The refuge is just beginning to get a look at the results of the fire.  The cabins were spared but many popular hiking trails and recreational access roads were burned over resulting in downed and hazardous trees and areas where hidden pits of burning ashes pose risks to the public.  Dozer lines mar the landscape in many areas.  The once beautifully forested Skilak Lake Recreational Area is a little heartbreaking to look at now, but life will return with a new and wildlife-friendly young forest.  Mushroomers and moose hunters are enthusiastic about hunting prospects as a result of the burn and the regrowth to come.  Leah reports that bear and wolf cubs have already been spotted in burned over areas. “And, it is really easy to spot wildlife now,” she added.  “The mix of burned and unburned landscape means many more species are going to find their future homes inside the fire’s perimeter.”

For more information and more photos of this fire go to http://kpboem.blogspot.com