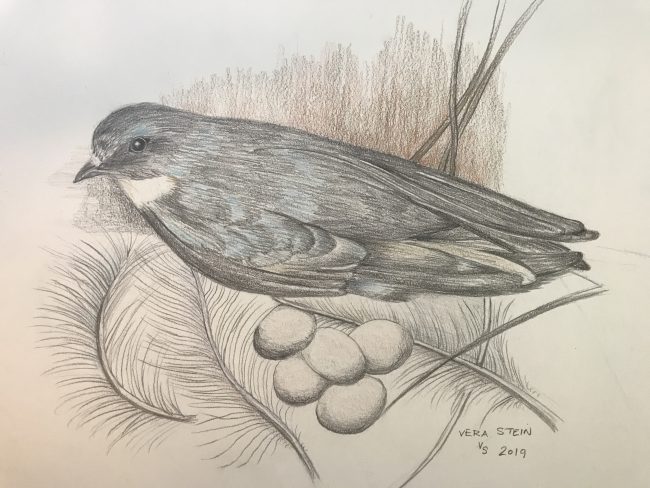 It’s 85 degrees in Bethel, Alaska, and we’re sitting in the back of a hot van in June, banding tree swallows, getting pooped on by the birds, and getting bitten by mosquitoes. Thinking I would escape the sweltering Florida summer, I instead arrived in the middle of an Alaskan heat wave.  Banding these beautiful, iridescent, freestyle-flying birds was a dream come true for this former Alaskan.  I had the time of my life, and I couldn’t have been happier.

Traveling long distances, aerial insectivores (which includes tree swallows) have seen significant population declines.  They are being monitored statewide and nationwide to determine if climate impacts, habitat loss, pollutants or pesticide usage has changed hatch timing, or insect abundance, which is the tree swallows’ main source of food.  The Bethel project is the westernmost range of the tree swallow study in North America. 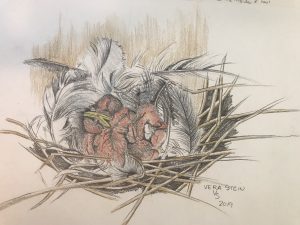 The birds migrate north in the summer, and have a short window of time to mate and hatch their chicks.  The bird banding takes place during the mating season in June, and both the adults and chicks are banded.

In the initial stages, the adult birds are banded.  This is done fairly quickly to ensure the adults return to feeding their young as soon as possible.  Each bird is banded.  The beak length, wingspan, weight and sex determination (male or female) is done within the span of a few minutes. Over the coming days as the chicks reach maturity, we start banding the chicks.  At times the broods are large, sometimes up to 5 or 6 chicks.  At the end of the two-week period, nearly all the birds in the 40 or so boxes had been banded.  Information will be analyzed and sent to the Alaska Songbird Institute and its network of cooperators.

It is always exciting to capture a bird that has previously been banded.  We came across several banded birds this year, and they were really happy occasions for us.

Citizen Science – The Education Component of the Tree Swallow Project 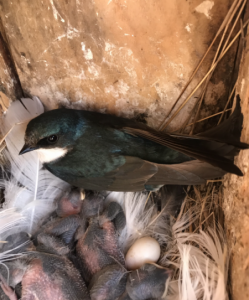 In order to encourage residents of Bethel, particularly youth, to get involved and learn more about their natural environment, USFWS partnered with the 4H Club to assemble the bird boxes that were distributed throughout town.  Residents throughout town agreed to put boxes near their homes, where they could enjoy watching the swallows’ activities right in their own backyards.  Children in particular were enthralled with the birds, and enjoyed watching us band them. The Boys and Girls club joined us one afternoon while we were banding the chicks, and the kids were fascinated. It was fun to have them around, and see and feel their enthusiasm.  An important element of the project, their involvement helps generate interest in nature for the next generation.

Salmon Fishing on the Kuskokwim

One Saturday afternoon there was a fish opener on the Kuskokwim River, and it felt like the entire city of Bethel was out on a boat that day! The parking lot for the fishing boats was jam-packed with trailers and trucks.  We were out on the water in mid-afternoon, and it was a productive and fun few hours.  A net was put up, and we waited for a signal. The water started to bob around a couple of the buoys. In all, four Chinook (Kings), and a couple of Sockeye (Red) salmon were caught. A good day’s catch !! And a lot of fun.

The year before, I had the opportunity to visit a few Native fish camps along the river, and talk to Bethel residents about catching, cutting up salmon, and smoking the fish in the traditional way.  We also discussed the shorter amount of time that residents were allowed to get on the water to fish, and the types of fish that were being rationed.  What an incredible lifestyle. Family time out on the water, and delicious fresh fish cooking on the camp stoves. It was heartening to see salmon drying in the yards of the fish camps, with the knowledge that there would be fish to eat throughout the winter.

We were invited to have fresh salmon stew at one family’s camp, which was an honor, and truly memorable.  Not to mention that the stew, cooked up with onions and vegetables, was delicious.

The U.S. Fish and Wildlife Service has a small museum attached to the offices, and it is packed with wonderful information about fish migrations throughout the state, as well as specimens of various wildlife that inhabit the area.  It’s well worth a visit.

Things I Enjoyed Doing Around Town

Many boardwalks meander throughout Bethel, and being on foot is a great way to see the town.  There are lots of beautiful lakes and sloughs, all across town. Walking along the Kuskokwim River was very meditative.

There is a new, state-of-the-art swimming pool and sports complex, and it’s a fun way to spend an evening (or two).  This particular Floridian wasn’t used to cold pool water any more, but the hot shower afterwards more than made up for it.

Bethel is not known for its Four-Star dining experiences, but regardless, there are lots of restaurants to choose from. (In an ironic twist, one cannot find fresh fish on the menu).

The Bethel Farmers Market, an organic farm, is open Wednesdays and Saturdays.  Their homegrown strawberries, sweet and delicious, are to-die-for.  Their potatoes are incredible- sweet, hearty, and firm.  Their lettuces are wonderful too.

I was told by a coworker to go to the hospital for lunch.  While initially a bit skeptical, I went anyway one afternoon and had a delicious caribou stew.

Saturday mornings, there is a birdwatching tour, leaving from the Fish and Wildlife Service office. On visits to the sloughs, we caught glimpses of a few songbirds and waterfowl.

Many thanks to Jason Sodergren and Betty Siegel of the Friends of Alaska Wildlife Refuges, and Patrick Snow from the Yukon Kuskowkwim National Wildlife Refuge in Bethel.  I hope our studies will be part of a larger body of research to help better understand the decline of bird populations and other species worldwide.