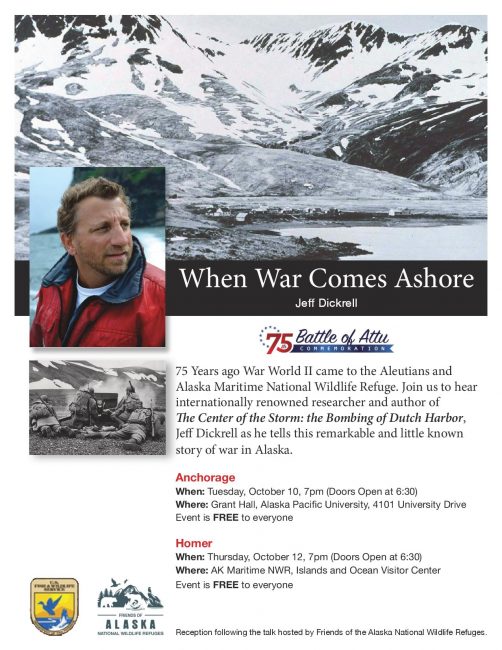 Join us during National Wildlife Refuge Week in Anchorage and Homer as we commemorate the 75th Anniversary of WWII in the Aleutians with speaker Jeff Dickrell, author of The Center of the Storm:The Bombing of Dutch Harbor.  Dickrell will share stories of the Japanese occupation of Attu and Kiska and the Battle of Attu on:

The Friends of Alaska National Wildlife Refuges will host receptions following the talks.

Dickrell taught history in Dutch Harbor for over 20 years and is a frequent and very engaging speaker on the war on cruise ships and for other occasions.   Dickrell has traveled widely throughout the Aleutians visiting the battlefields of Kiska and Attu.

May 2018 marks the 75th anniversary of the Battle of Attu, the only ground battle to take place on American soil during WWII.  For thousands of years, Attu was home to people and wildlife and has been a federally protected wildlife area since 1913. It is part of the Alaska Maritime National Wildlife Refuge.

Although Attu Island had been occupied by Unungax people for thousands of years before Russian contact, at the time of World War II, only 42 people lived in the tiny village in Chichagof Harbor. When the Japanese forces invaded Attu in June of 1942, they captured the entire village and sent them to Hokaido, Japan as prisoners for the remainder of the war. Half of the village died in captivity, including Chief Mike Hodikof.

American forces landed on Attu Island on May 11, 1943. The ensuing clash between the well-entrenched Japanese forces and the Americans lasted 11 days and was one of the bloodiest battles of the Pacific Theater. 549 Americans and 2,400 Japanese lost their lives in brutal hand to hand combat and fog-shrouded sniper fire. Many more succumbed to injuries from the wet, cold conditions.

May of 1943 forever marked a chapter in the world’s history, in a national wildlife refuge’s history, and in the lives and legacies of people who lived and died on a remote and rugged island that rises out of fog as far west as one can journey in North America. Today, Attu still bears the scars of this brutal battle between the United States and the Empire of Japan. The people that lived on the island, the soldiers on both sides who fought there and the descendants of all of these citizens and warriors will forever bear their marks of battle too.  Attu’s remaining residents never returned home. Some were resettled on Atka Island, and others were scattered across Alaska and the Pacific Northwest.

In 2017 and 2018, the Alaska Maritime National Wildlife Refuge is honoring the sacrifice and valor of soldiers and civilians 75 years ago. Eleven descendants of Attu joined the refuge staff aboard the R/V Tiglax to travel to their former village site and leave a memorial at the former site of the church.

Join us on October 10 (Anchorage) or October 12 (Homer) to learn more or visit the Attu75 website to and link to our Attu75 storymap for maps, photos, and video.