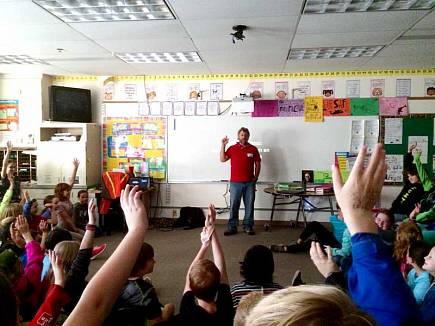 by Christina Whiting (Friends Volunteer), for the Homer Tribune

Last week, Jeff Dickrell, retired history teacher, internationally renowned researcher and author of “The Center of the Storm: The Bombing of Dutch Harbor,” came to Homer to share photographs and stories from the Battle of Attu, when Japan attacked the Aleutians during World War II.

“This was the only World War II battle fought on North American soil and is also known as the Forgotten War,” Dickrell shared during a presentation to fifth grade students at West Homer Elementary. “Why do we need to know about this? It’s important that we honor and learn from the past.”

Attu, a tiny village at the end of Alaska’s Aleutian chain, was home to 44 Aleut who lived a subsistence lifestyle and were a peaceful people. They raised foxes for the fur and were famous for the grass baskets they made. Taking the villagers by surprise, the Japanese took control of the island, and along with it, American soil in the first foreign invasion on American soil since the War of 1812.

Plans were drawn up to retake the island in 1943, known as the Aleutian Campaign. On May 11, 1943, after a lengthy air campaign, 11,000 American troops reached Attu, greeted by fog and silence.

“No one had ever fought in a place like Attu,” Dickrell shared. “It was far from the United States, cold and wet, with cliffs and rocky beaches, and no trees, and they weren’t prepared. When the Americans landed on the shores, it was like walking into a trap. The Americans didn’t know where to go and were completely blinded by the fog.” 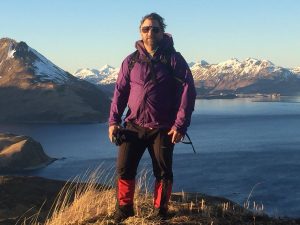 Dickrell shared that it took the American soldiers four days to realize that they needed to leave the beaches and get to high ground if they were to find the Japanese soldiers. He shared the challenges that soldiers on both sides faced, including frostbite, hypothermia and trench foot, and that when a solider recovered a diary from a dead Japanese soldier named Nebu Tatsuguri who was a doctor, and the diary was translated, it read that the Japanese soldiers would not surrender, that they would fight to their death and commit suicide before being captured, which they did.

The battle to reclaim Attu was expected to take three days, but lasted 19. By the end of the battle, nearly 2,400 Japanese died and 549 Americans were killed in action, 1,148 were wounded in action and 2,100 had non-battle casualties, including frostbite and trench foot (foot rot). For every 100 Japanese on the island, 71 Americans were injured or killed. The village of Attu was destroyed and only 24 of the 43 Aleut who lived there survived captivity by the Japanese. The Battle of Attu was one of the deadliest battles in World War II, second only to Iwo Jima.

At the heart of Dickrell’s message was a desire to honor the men who fought this war.

“It’s surprising how little the general public knows about this war,” he said. “If you read books on World War II, the Battle of Attu gets like a half a page.”

Dickrell’s message is also about sharing the lessons learned from this chapter in American history. These lessons included learning what clothing and footwear were appropriate for the climate in order for soldiers to stay dry and to prevent hypothermia, the need for soldiers to be able to take their boots off on a regular basis in order to prevent foot rot and the knowledge that Japanese soldiers will not surrender.

“History is the story of everything that happened before now,” he shared. “It’s important that we learn what we did wrong so we don’t do it again, so we can learn from our mistakes.”

Today, Attu is abandoned, but the landscape remains littered with the debris of war.

“Jeff is the guru for folks who know and understand Aleutian World War II History,” said Kara Zwickey, Visitor Center Manager at the Alaska Islands and Ocean Visitor Center in Homer. “So many people don’t know that this war happened and Jeff spent years researching and corresponding directly with war veterans. He is an iconic individual who has the capacity to hear and share stories. Every year during National Wildlife Refuge week, we try to create awareness of, and promote, what’s happening on the refuge. We were delighted to be able to bring him here and have him tell this important story to the community.”

A history teacher in Unalaska for 27 years, Jeff retired from teaching last year. The author of “Center of the Storm,” photographs and interviews focused on the bombing of Dutch Harbor, Dickrell worked collaborately with individuals from all across the Aleutians, immersing himself in Aleutian history, serving as a Board Member with the Museum of the Aleutians in Unalaska and was given access to the National Archives Still Pictures Division in Washington, D.C.

May 2018 is the 75th commemorative anniversary of the Battle of Attu and the Alaska Maritime National Wildlife Refuge is working on plans to commemorate the anniversary at refuge areas around the state next year.

“This is a really big deal and we want to share this story with the community,” Zwickey shared.